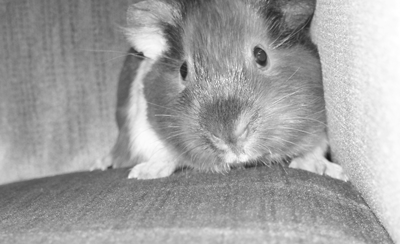 And Watch Him Build A Bubble Next

Just in time for the annual Dionysian season of excess, I’ve entered a self-imposed, monk-like state of sobriety. In order to achieve the inner peace of a random monotheistic lifestyle I have foregone libidinous escapades to find and nurture my chi. As a result life has taken on a murderously boring hue with routine and beige replacing chaos and black outs. Alternatively, I’ve managed to entertain myself on higher plains of engagement. And while I’m not suggesting the rest of you follow suit so stringently, if you should suddenly feel the need to do a pre-summer body purge, here are some cranial games to keep you occupied during those endless hours of numbing solitude and paralyzing self-awareness.

Get a pet.
Most people will suggest pets are not accessories or dolls and shouldn’t be acquired for amusement purposes. But I would like to know exactly what those people suggest we do with domesticated animals instead. Therefore, since we’re not using these “pets” as seeing guides or hunting companions, entertainment it is. A fish is easy because it can’t go anywhere and seems compelled by whatever you have to say to it. For the record, it is also suggested that you don’t move the fish bowl around too much because it creates confusion and fish have tiny hearts.

Play social RISK.
Like the masturbatory game where sheepish boys conquer fake countries in order to satisfy pathos fuelled social desires. But you’re playing with your friends and no one else knows you’re playing. The objective, just like in real Risk, is to divide and conquer. This is a lot easier if you have several groups of friends and acquaintances since there are obvious human limitations and tolerances. Costumes are not recommended, as it will alert people to your inconspicuous Machiavellian scheming.

Remodel the habitat.
Perfect time to hang that mirror. Build the snuff dungeon. Re-paint the opium den. Assemble your new swing set. Get a swing set. Collage the windows. Install that nanny cam you’ve been waiting on. Get a nanny. Rework the plumbing. Rewire the wires. See what all those breakers are actually for.

Get a job.
Now that you’re awake before 4pm and can generally see and stand straight, why not try out the “working” world people are always chitchatting about. Apparently there are places open before midnight patronized by other professional types and these employment opportunities offer a steady paycheque wherein someone actually gives you money to hang out. It’s like going to a bar where they pay you to drink. Just don’t drink on the job.

Try out a relationship
You had that problem before with the yelling and the cheating and the disappearing and the public arguing and the occasional acts of violence, but you’re different now. Plus, if it still goes sideways you won’t have the dependency to blame. On second thought that may not actually work in your favour, but you’ll feel better knowing the bottle will still be there if you need it. Even if he won’t.

Cure illness.
Most medications don’t mix with a rambunctious lifestyle. Anti-depressants, anti-biotics, anti-psychotics, ant-inflammatories, painkillers, sedatives, steroids, quite nearly anything that might remove bad news from your innards. If you’re like me you’ve probably been suppressing those viruses until you were ready to give your liver some breathing room. This power cleanse is a ripe opportunity to clog the liver with pharmaceuticals instead. You might even clear up that rash.