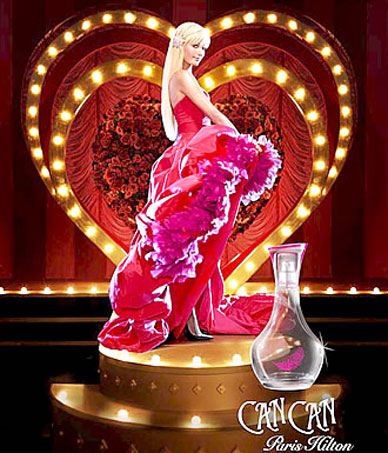 The beauty market is currently glutted with celebuscents, heaving with everything from Tom Ford’s crotch to Paris Hilton’s Can (can.) Though bottled fame is nothing new – Elizabeth Taylor has been marketing her Golden Girls-friendly odours for decades – where her wares were peddled with aromas of cynicism and the self-awareness of a Shopping Channel devotee, these new products are a boon for the fragrance industry and consumed with unabashed glee by many. And since Celebufumes are the largest growing segment of the $3 billion perfume market, there is no looming shortage ahead.

When choosing a perfume, some women hope to become enchantresses or vixens via a host of vague smells and an over-designed bottle. Through the osmosis of celebrity perfume, retailers convince consumers that smelling like Britney and Paris is akin to being Britney and Paris, despite the fact that these cheaply made odeurs would never be worn by their namesakes. Namesakes who are made up of Hollywood’s dying and dead.

Perfumes are not named after dynamos or trailblazers. They are the sole property of careers gone wrong, talent that never was and desperation unparalleled. They are granted in no way to the type of people one would normally emulate or aspire to be like. Confusing as it may seem, success in your field doesn’t guarantee a perfume, but rather a marred past and no hope for a future are surefire tics on the path to Fantasy by Britney. It is the equivalent of running a perennial garage sale in the alley behind your house. Though something is always for sale, the inventory is cheap and rarely changes.

Marketers may believe their products are part of the greater umbrella of aspiration consumerism, but the characters they use to shill these products seem either a great fallacy or a painful irony. Mariah Carey is crazy, Paris Hilton is a racist, herpetic ex-con and Britney Spears is a mentally challenged, drug-addicted, unfit mother. Diddy or whatever he goes by is marginally accepted by the recording industry, but mostly seen as a talent less suit with an uncanny ability to capitalize on the dead. The list is endless; Out of work rodeo clown Jessica Simpson, Hasn’t worked since Sex and the City Sarah Jessica Parker and even Was I ever talented J-Lo, all have competing fragrances lining the shelves of discount drugstores around the continent. For all these ailing famous people, a single perfume can be the sole money generator in times of financial drought. But why do people actually buy them?

Is it part of the greater desire to consume personality rather than develop it? If there are actually people out there so desperate to associate with the delusions of fame that they are willing to spritz vagina scented cat piss on their bodies, we should all be terrified. It’s bad enough we create and laud these half-humans in the first place, but to reward their mediocrity by drenching ourselves in their manufactured pheromones is fucked up. If smelling like Celine Dion is not a sure sign of the apocalypse, I really don’t know what is.