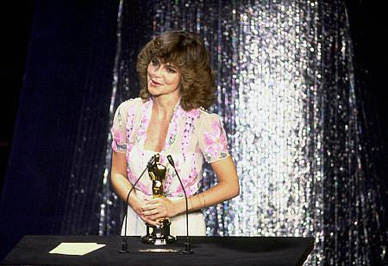 Sally Field won a Primetime Emmy recently, and she took the opportunity to get sanctimonious. Her acceptance speech was vaguely anti-war and she tripped her way through the words in a way both touching and deluded. If you watched in Canada, you caught the end of her speech where she boldly claimed “if mothers ruled the world, there would be no more goddamn wars.” So what, right? She’s no Hanoi Jane. But for Americans, the Big Brotherly FOX Network found Sally’s words disgraceful and censored out the end of her speech, displacing it with a very awkward cut away and dead air. Prompting many to think, holy shit what a weird thing to do. Kathy Griffin was another victim of unnecessary censorship, when her joke about Jesus at the Creative Emmy fell flat on the ears of the Catholic League and resulted in the entire bit being removed from re-broadcasts.

FOX censors are claiming they cut away from Fields because of the word goddamn, but that seems a rather thin excuse considering their programming generally displays more vulgar behaviour and language than an old-timey whorehouse. Not to mention that a majority of the shows nominated for awards that night regularly feature a barrage of cussing, sexing and mob-style shooting. All things considered, it would appear that FOX installed its version of fair and balanced coverage, and vetoed the musings of an aging actress because she was speaking out against an already unpopular war.

Her words came on the heels of a trying week for anyone still deluded enough to think there were any positives remaining in the battle against terrorism. For a beleaguered network that had long ago embraced a shady administration, FOX was merely taking orders, albeit standing orders that at this point don’t necessarily need to be voiced.

Blathering though Fields may be, and as frequently unfunny as Griffin generally is, both have every right to speak their minds. Celebrities are a distraction for the masses, but also serve as a kind of retarded megaphone for those who don’t have access to a soapbox. Through their well-meaning diatribes many people are able to relate their long-standing frustration at having been punished for too long by pro-war pundits and mega-Christian talking heads.

As painful as it is to side with a woman like Kathy Griffin, it’s more painful to see the vitriol so many ruddy-faced Catholics have spewed against her. Considering the countless years we have endured alcoholic, narcissistic and promiscuous celebrities and politicians thanking God for their success, it seems only fair that someone come out with an opposing view. Just as there’s no harm in Gidget speaking out, not against wars, but for mothers. Are her neutered sentiments really going to cause children to start worshiping Satan, or whatever it is the censors are trying to prevent when they bleep otherwise harmless words?

But truly the most deplorable fact in this whole mess is that the so-called guardian of America’s purity is also the same network that picked up The Simple Life when it was slated for cancellation. For shame FOX, for shame.