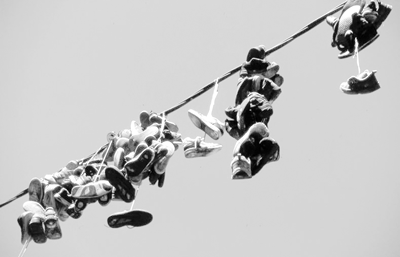 Keeping The Wolves At Bay

It’s an old idiom that speaks to the hierarchy amongst animals in reference to the social politics humans subscribe to; there are alpha males and females, there’s the competition and filling in the gap is the rest of the herd. Animals use natural order to eliminate weakness and survive as a pack, but we use it for just the opposite. Ambition isn’t led by a desire to enhance the community, but to break away from it, to ascend to a stature above the hoi polloi. And if you didn’t start at the top of the ladder, you’ll have to claw your way up. This used to mean striving for a bullshit corporate position, but in a community increasingly populated by career floaters, it means assuming a transparent social position that will lead to more advantageous plastic encounters.

Social climbers used to be categorized simply by economic fortune, or misfortune. Now, with a far blurrier class line, wealth is quantified in reputation, attraction and plausibility. Will people believe you’re better than you really are? Are you desired for your projected persona as much as the next person? Can you maintain the illusion of superiority long enough to become something … anything?

Just like traveling magicians used to employ magnets, mirrors and smoke, people will exploit an overwhelming amount of public delusion to maintain and gain acceptance and notoriety. And where the alchemists struggled to turn shit into gold, more often than not the failure is in the process. At best you can turn shit into a garden, but there had better be something to fertilize. The unfortunate reality of modern magic is the unwillingness of practitioners to submit to their own illusions. Most packs will acquiesce to a leader that steps into the role, but a dictator that doesn’t buy into his own propaganda is less than convincing. And when fantasy fails, there’s always fallacy. Best regarded as the dating pool of success, if you can’t be at the top, you can always date someone who is.

This rule applies to any social circle, particularly ones devoid of depth. Whether the currency is physical, intellectual or “artistic” the fastest way to the head of the pack is via the den leader’s loins. Seeking those attributes you lack and making up for them by adopting someone else’s is a lot easier than self-betterment. In these use and be used relationships, one of you gets the pretense of power and the other gets an accessory. Welcome to the new marriages of convenience.

Male peacocks use elaborate feathers and gimmickry to mate; male humans use pre-fab lines and a lot of booze. Female lions are exceedingly protective of their prides; women don’t hesitate to assert dominance within giggling packs. Whether beast or gentile the conviction to assert a position amongst the herd is intrinsic, but the way it’s carried out is too often pathetically transparent. Petty aspirations generally lead to shallow ends. There is little to inspire respect from peers when the only desire within successors is to be seen. As amalgams of ability and opportunity we take into account that some of us just weren’t born to lead and most of us naturally fall into place. And like wolves that can’t keep up, or horses that go lame, the only way to proceed with antiquation is to discard and move on. Granted, people are a little tougher to dispose of in an urban jungle, but thinning the herd every once in awhile is crucial for communal advancement. Until then, we’ll have to remain lemmings desperately lurching at the lion’s throat before hurling ourselves over the edge.