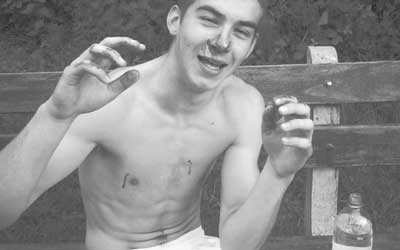 Coming Now To A Park Near You

I’ve always been terrified of teenagers. As a child I avoided public parks after 4pm and crossed to the other side of the street if I saw puberty approaching. Then, teens embodied dislocated rebellion, pre-adulthood free of the societal reins that prevent human chaos. They were sycophants obsessed with their own bleeding hormones and furrying genitalia. Of course at some point I became one of those pimply monsters and subsequently began hating and fearing myself. I was consumed with bad poetry and an unintelligible desire for mass conformity. Head down, I managed to somehow avoid the litany of tantrums, bullying and abnormal genocide that occurs in high school halls. Stories of teens gone wild were fervent, but never relevant.

When I emerged relatively unscathed from awkwardness, I learned to disregard and ignore anyone between the ages of 13-17. But spring break and public transit always add hastiness to my steps and remind me that there is still terror in the streets.
Recently a rash of what the media are calling “swarmings” have been plaguing suburban parks. Young hooligans have been attacking other young hooligans in gangly numbers, looking for trouble and taking lunch money from the unsuspecting. Police are calling these crimes Alarming! Senseless! Dynamic! It’s like teens just ain’t what they used to be and are now something so frightening, so unreachable, creatures from the great beyond … and beyond.

Teenagers are a race amongst themselves. Their goals are simple: eat, cry, fuck, complain, punch. They should be treated like the greedy wolves they are and sent to slaughter. Barring that, we should implement nighttime curfews. That way, they’ll turn into respectable twenty-somethings like the rest of us, who are far more complex beings. We are people who crave: cuisine, passion, money, attention and for our gas to be reconnected. Most of us never even went through puberty. We simply were, and are.

All of the functioning adults I know were excellent students, stand-up citizens and people who regularly obeyed the law. All of the capable adults I know didn’t push the limits of society because they knew that order and sanctity could only be achieved through staunch prudishness and pacifism. All of the adults I know, oh no – that’s right, I don’t know any adults. We’re all surrounded by make-believe grown-ups. People pushing their way to the front of the line to grab respect and power, not through the channels of accomplishment or success, but through age. Comfortable relying on the devils dwelling in youth, they strive to strangle any potential revolution of thought by vilifying everyone under the age of 30.

It’s completely unacceptable to run around “swarming” people in parks. Yes, I believe that juvenile delinquents should be sent to naughty prisons forced to wear nasty yellow jumpers. But do I think that teens today are bad news? Not any worse than teens yesterday or the day before that or the day before that. Hormones make you stupid; they also make you ugly and gawky. If you can survive that with only a few bruises, all the better for you, and if we can offer solutions to their boredom aside from punching people in public so much the safer for us. There’s nothing I detest more than puberty, but I’m willing to embrace it if it keeps groups of kids from beating me up.