Booze Up and Riot 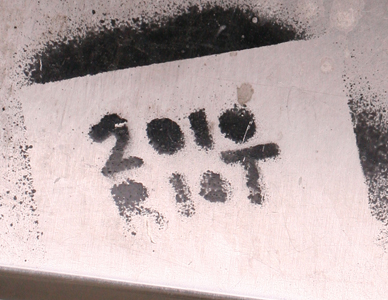 As the run-up to the 1994 Stanley Cup final began, there was a palpable mood in the city. The mainstream media folk took it as ‘Nucks Fever. Others took it more ominously.

The writers at Terminal City could see that this was going to end badly. Passersby screaming “Canucks!” at all hours of the day, the lack of any other topic on radio, TV, and newspaper, and the gleam in everyone’s eye that said some payback was about to come.

Three weeks before the riot, Terminal City ran an article by the incomparable Brian “Godzilla” Salmi entitled “Booze Up and Riot.” Mostly it was about when he was a drunk teenage hockey player but it also included a dark satire about the riot that was yet to come. Back then, Terminal City was produced using traditional methods: copy was output on galleys which were then cut out with an exacto-knife and hot-waxed onto cardboard. Really. This is relevant because Salmi’s byline fell off on the way to the printers and the article was printed anonymously.

The Riot occurred. Check out Wikipedia for some reports from back in the day, including this video.

Editor and publisher Darren Atwater goes in at noon to open up the Terminal City office for the day and finds a camera crew from CityTV (then UTV) waiting for him. The police have tipped off the station that they are going to charge TC, Atwater, and the writer of the article with Counseling to Commit a Crime, to wit: the Stanley Cup Riot itself. Oh, and did Atwater have anything to say?

Atwater tells the station that the idea an article in the paper from three weeks before was responsible is ridiculous, and evidence that the Vancouver Police were desperately trying to shift the blame from their own lack of insight to some likely scapegoats. CityTV demanded to know who wrote the story. After all, it was anonymous. Rather than Salmi, the name of a well-known right-wing blowhard from The Province may have been proffered as the writer.

All afternoon, CityTV teases the report: police about to arrest the instigators of the riot. Film at 6. At 6, the two anchors breathlessly tell the story of the investigation, interview the cops, and say arrests are “imminent.” One of the anchors then turns to the screen, hatred in her eye: “ Terminal City told us a well-known Vancouver columnist wrote the story. Well, we asked him and he vehemently denies it!”

The Vancouver Sun, Province and Globe and Mail, having watched TV, then write their own stories. Maybe two weeks after the CityTV story, two large mustachioed gentlemen enter the Terminal City office. “May we have a copy of the riot story?” “Sure,” says the now-working-for-the-Georgia Straight writer who was sitting behind the counter. “Knock yourself out.”

The police now had an actual copy of the paper, and from there the story started to cool.

Months went by without charges. Eventually Terminal City filed a “Freedom of Information” request for the police report. The report made clear the request for prosecution was dropped when the cops failed to find any rioter who had actually read the article. More importantly, the writer of the report felt that a trial would only turn into a “showcase for Salmi,” giving his ideas wider notoriety.

Mark Twain once said, “History doesn’t repeat, but it does rhyme with itself.” (That might have been a Quote of the Day on the TV guide channel) Obviously a riot could never happen in Vancouver again. And obviously, if it did happen, the City and the police would never be so simple minded as to actually believe pinning the tale on a scapegoat will solve the problem. And obviously, if they do look around for a scapegoat, they would never stoop to blaming the same people who weren’t responsible the last time. But if it could, would and does, we’re here for you Vancouver. Blame us. It was hilarious the last time, too.