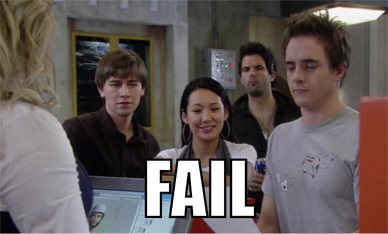 Ooh ouch! I failed to notice, but when I was unsuccessfully looking for Emilie Ullerup bikini pics online I found out that CBC completely jacked the actual episode 11 that was supposed to run a coupla weeks back when they were figure skating and they didn’t even bother to run it or say anything! Leaving me, the only remaining viewer, to believe that there was some kind of crappy Lost-esque time puke going down. No sir though, and that there episode 11 is actually now episode 12. They just threw that guy right in the shitter, and I didn’t notice because I am too scrupulous to recognize such buffoonery, and was actually, truly, crapping during the pre-ep round-up (no jokes, I swear). Honestly, if I was Doug Coupland or his personal assistant I’d be fucking pissed! Hell, I’d probably write a fictional account of the whole incident that was a real drag to read. Works every time.

So last episode’s next week, or will it air at all? How do they live? My soul feels brand name!