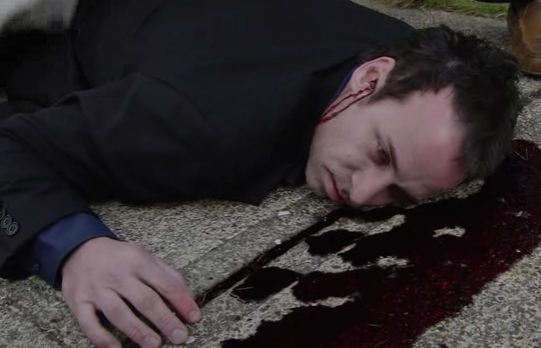 God, having that week off really did me some good. You know when you’re watching a show week after week and you start thinking about how many babies died on Earth because of the energy used to power the lights for it and you just see decomposing babies when you close your eyes and before you know it you just need to take your own life? That was totally me! And I didn’t even realize! This week’s episode had a bona fide parental guidance warning so I was absolutely sure that one of two things were going to happen; either all the cast and crew from all of CBC’s sports, news and dramatic programming were going to get together and finally lynch the midget (for being a recycler) and film it, or somebody was probably going to eat a marzipan or mashed potato Jesus’ face with their hands. Neither of those things happened, but I think the real reason for the hey-now was that they truly fucking killed my favorite character, heroin turtleneck, for real. Right after the meaningless character without purpose lost his virginity to FHMA’sSWITW2006, and the inbred/illiterate girl graduated from high school. They killed off heroin turtleneck and put his bleeding turtlenecked head right there on the 60’, and the midget cried so fucking hard that he had to go to the hospital. Meanwhile, his mom went gay and moved to the gulf island lesbian compound.

She was over there getting an over-50 lesbian living room backrub, and so the completely useless character and FHMA’sSWITW2006 make a fantastic bet that she’s actually going to stay gay and not just for the long weekend, winner gets to kill the loser. They go out to the compound to catch her eating a muffin, only to get captured by 100 angry lesbians that were performing a lesbian fertility ritual starring three lesbian virgins (one of whom was wretched). The now-lesbian midget’s mom was kind of dressed like a hobbit. She defrosted the lesbian’s deep freeze and accidentally drank the magic sperm, and all the lesbians understandably lost their lesbian minds. Some alarm went off and there were angry lesbians running all over the place with rifles and dildos, stabbing each other with them as if they were bayonets. And it turns out that the alarm went off because the show was really in danger of becoming too ridiculous to make it to the end of the season, and then David Hasselhoff Jr jumped out of the bushes. He just showed up there like a champ, for no decent reason that I can bother to explain here, and just happened to be the ivy league penis that the three lesbian virgins (one of whom was wretched) needed to make more lesbians. It all had something to do with fortune cookies or crackers or something poor.

Back at the office, the bosses of that humourlessly ripped-off video game company decided that because the heroin turtleneck and the guy that sucked his orange fingers both died, and the inbred/illiterate finally graduated from high school at 35, she should be the boss of jPod. She thought as hard as she could about it but still couldn’t understand what they were proposing, immediately deeming her most appropriate. The midget explained it all to her, and to thank him she brought him tuna casserole, but he was too busy fondling dead heroin turtleneck’s bare chest to eat it. She was feeling angry and bloated about that, so she makes this rule that no one working at jPod can hump anyone else working at jPod, and then she leaned over and let out a fart that spanned a commercial break, went right through into the credits and finally stopped about 5 minutes into The National. The other actors were trying to play their parts, but all you could hear was three boxes of Kraft Dinner coming out. She must’ve felt a lot better afterwards, and I was just so, so shocked and happy. I’m happy!

Next Episode: Theory Of A Deadman Perform Live