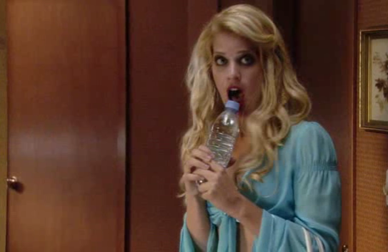 I had the craziest fucking dream last night! I was sitting at Cafe Artigiano on Pender, but it wasn’t Cafe Artigiano? Sipping on a chamomile latte with none other than Douglas Harold Coupland himself. And I’ll tell you, we had the greatest talk, me and him. We talked about cool things, like how to be a successful author, Morrissey, and how many years I have left before I start shopping at Eddie Bauer. He straightened me out on a few things too, namely the wrongful hard time I’ve given his baby, jPod, and what the show is on TV for. He said to me, “John, you’re the smartest man in Canada, why are you giving my show such a hard time? Look, this show is giving shout-outs to everything that’s really cool about now, and I don’t want you to miss the boat, OK? Think it over.” And I was like, “I don’t want to miss the boat, but the acting and writing!” And he was like “It’s like that because that’s you. That’s now.” And I was like, “I’m worthless.” And he just shook his head and said, “You ever heard of that movie Tank Girl?” And I was like, “Why, Doug?” And he said, “The lady who directed this episode hung out with Ice-T, look it up.” I stroked my chin, thought that was just Doug being Doug, and looked out onto West Pender – and for some reason my life coach was walking naked in the middle of the street with this just massive pulsating rhino’s hard-on, shouting “I shared my yogurt!” at the passing cars. The scary thing is that I checked on the internet and she really actually did direct Tank Girl. Explain that shit.

Remember back a long time ago when they killed off my favorite character, the authentic crackhead? She was the best. She’s gone now and I’m still a little chapped about that, but as consolation they’ve written in a completely separate but similar authentic crackhead to re-complete the Vancouver theme. And it only gets better! The new authentic crackhead is in the episode because she’s going to get her inaugural live batch of double penetration for a porno flick because of the Asian gay lover crime boss who terminally over enunciates! How could that get any better? They’re going to film it in the midget’s parents’ house because the Asian gay lover crime boss who terminally over enunciates asked! Better than that even? It turns out that the midget used to be the authentic crackhead’s spousal partner back in the fictional day! Our little man placed his pretend pee-pee in the new authentic crackhead a whole bunch of times, and probably put her pretend crackhead pee-pee in his mouth even more times! But how could this possibly play out any better at all? The midget has no idea about any of this whole load of shit because he’s shackled to a shoe machine in China! And that’s a whole different story altogether.

The midget and the the man-horse mix went to China because the Asian gay lover crime boss who terminally over enunciates kidnapped the turtleneck and sent him over to make shoes and shoot heroin, and when the midget and the partially plucked chest finally find the turtleneck, the turtleneck has poked so much heroin that he’s not wearing a turtleneck at all. The turtleneck has no interest in going back to Canada, realizes that his offspring is the devil’s spawn, and wants to stay to make shoes and poke heroin. I have to admit, I like heroin turtleneck way better than regular turtleneck. Then there’s the Asian crime boss who does not over enunciate. He’s coordinated with the Asian gay lover crime boss that over enunciates to have the midget and the he-beef unknowingly deliver heroin from… Canada… to China? Lazy and desperate. But anyway, blah blah they got shacked to a shoe making machine, hot carl kills the Asian crime boss who doesn’t over enunciate, bird-flu breaks out, a really terrible song is played, and they close with the turtleneck back in Canada without his turtleneck, buying heroin in an alley a little too far West off Hastings. An only half-shitty effort I suppose, but I have to call mini-bullshit or something. Well maybe full bullshit because the dealer was black and you find me a black heroin dealer down there. Racist. Full bullshit.

Next Episode: An Asian Man Gets In A Car Accident