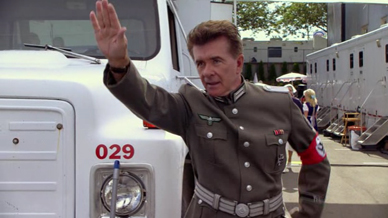 I am so sorry everyone. CBC and Douglas Coupland fucking threw it down and made it rain on me last night. They made it rain so hard on me and I feel like I was out on the town and then efficiently laid down. Last night was the sex episode and I knew it was coming, but so fast and so hard??? Yes it did. Finally the return of the crackhead girl – I missed her last episode and I think she might actually be a real crackhead, you know? She kind of looks like a real one and a lot of actors are, aren’t they? Strangely, she has the exact same Alan Thicke shrine that I dreamt about last night; I remember I had children’s hands.

But this episode was actually also all about dirty random sex and it was dark out and I just happened to have my housecoat on… So, well, the winner dude shirtless character was on the VanCity Players website – awesome. Then the crackhead drops “you’re Bam-Bam from the Flinstones wearing chaps” on the Thickburger and I swear to you that I laughed so hard that So Nice chocolate rice milk came right out my nose and splashed all over my innocently exposed groin. Then! Then the winner captain and the character I’ve only now had a purpose to write about played an actual video game on an actual existing, current video game system that some poor gaffer probably had bring from home and let the junky actors touch. This for me was nice because the “Defendoid” game that they “played before” was pissing me right off and the damned thing was right-to-left. But now they played real Xbox 360 while FHM Asia‘s Sexiest Woman in the World was reading an old ass Vice Magazine (volume 12, number 7), and I realized I too have the very same issue just behind my toilet, and I had the hardest Coupland-style culture cum ever imagined.

Have you ever heard of a place called Churly Burger on Marine Drive? I used to go down to the Blue Boy on Marine when I was working at the mills, but I’ve never been further West than Main St. so I dunno what the cross street is, but it looks great! If you have kids you should totally take them there. They shot on location and the mannish alpha character actually, literally, seriously folks, jerks off his sister right in the restaurant. On TV. That particular type of relationship is forbidden in my family now, but it was presented so purely, so boldly, so out there. Did Cronenberg direct this episode or something? My views on incest have changed.

It cut to one of them “Mocap” screen thingees, and it took a long time to figure out that Mocap stands for mo’ capoeira. And that’s exactly what it was. It was the midget and the inbred girl capoeira dancing, girl-fighting and making out in speed skating outfits. It was maybe even the most painful part of the series so far, and I was half-mast, wincing with delight/writhing. Regularly filmed pain, then CGI pain, and a little plot line about men’s fashion shoes to fluff me. I was so feeling great, I was starting to write this and I was going to open it with an official apology to everyone, but I rethought it… and do you know why? Because just as I started to love my life again, and starting to think about getting my Foodsafe again, my absolute favorite number one personal fictional friend, the crackhead…

Douglas Coupland and CBC killed her off. Them and the Thickeler did it to her character. They/He made chinese mafia kill her character off and throw her crackless character’s body onto a boat full of maple syrup with clearly no crack at all or lighter to tide her over. She and me were both rightly choked. That is super not appropriate Coupland and CBC, no. Too far is too far. But FHM Asia‘s Sexiest Woman in the World rounded up a massive batch of young moms for the smoker fitness character to molest and whispers in his ear that after a few drinks, every woman is bi-curious.

I’m going to have to go ahead and officially upgrade this show to Doogie Howser MD meets Scrubs meets Keys to the VIP. Coupland, CBC, you’ve really pulled it off. You should take yourselves out for one of those indoor rock climbing sessions or something nice, because you’ve earned it.

Next Episode: Can You Say Gemini Awards?