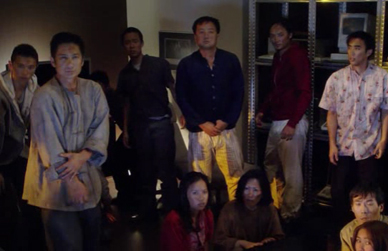 I had been walking around all week figuring that the 500 filthy Asians we met briefly at the end of last week’s episode were just there to get a glimpse of the FHM Asia Sexiest Woman In The World 2006, but as I finally figured out last night, they’re actually actors playing modern slaves that ended up breaking up wee Ethan’s authorized date-rape by being dumped there by his real estate agent brother. That was accurate, and I agreed because real estate agents in Vancouver are famous for always being involved in either human trafficking or child molesting. So the little fella goes down to the club to ask the molester about the whole thing, they played Chromeo, and I let a defiant piss go right into my jeans and chair.

I’d been training in my life coach’s garage/gym all day and I’d drank so many Strongbow that by the opening credits I was starting to reel about, get really violent, and puke a bunch. I dozed off for a minute and I thought I dreamt about Alan Thicke in full Nazi uniform, precisely managing to incorporate the suit he wore so well into a classically putrid Canadian television interaction involving eyebrows. I said a short prayer, I looked up and asked my life coach if I was having another vision, he said no. It very, very, very randomly flashed “BBQ chicken, ready to serve”, and I asked him again. By this point I was missing a questionable sequence where a bushel of jokes surrounded the refugees getting put to work making garments in the midget’s apartment. The molester made them do it and has some kind of 3rd party control on the midget’s domicile. The mom made the slaves Rice Krispie squares because she thought they’d be sad about missing rice (ROFL!!!), then it maybe not so randomly flashed “Sugars, 10g”. FHM Asia’s Sexiest Woman In The World, meanwhile, she’s developing a sort of kinship with a very formal British lesbian character.

I’m really starting to wonder about the role the midget’s mom plays in this youth-reader adaptation, she’s always letting poorly played junky-looking bikers manhandle her. The sexual aggression coupled with the age-gap was really making me hungry. The midget dressed up like a refugee in protest.

With all the human trafficking, goose-stepping and double-barreled sketchy representations of both lesbians and the British, I was putting up my hand and calling out, “Is it hilarious systemic intolerance?” every few minutes, although no one was asking if I knew what it was. But then the Asian gang boss and the Thickener kicked off the super liberating waltz sequence. They gazed into each other’s eyes, no one laughed, and thus Canada’s panty thin veil of acceptance remained intact. Then the molester made a poignant square-footage joke, mom and turtleneck killed another biker. Etc. The previous inter-racial man-on-man waltz scene allowed for some breathing room, so as the posse of 500 no longer filthy Asians were being carted off to some sort of terrible prostitution, Alan Thicke assured them that he no longer thought that they all looked alike. Zing!