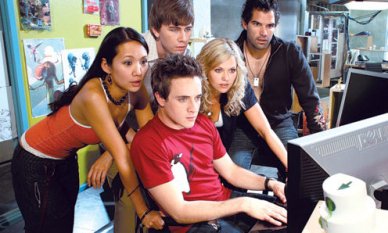 I have a throbbing respect for pain. You know, the stuff that makes your toes curl up and your brain fry a little? That’s the stuff. One time I even sat through half an episode of that show where semi-famous people have choirs that compete against each other for charity. So when the chance to watch all 13 episodes of that new CBC/Coupland jPod and then give play-by-play and then cry myself to sleep came up, I couldn’t say no. It looked like a guarantee… Alan Thicke, Canadian television, youth.

I was learning up on Sir Douglas Coupland, and did you know he knows Morrissey? Yup. So he says. Anyway, according to Wikipedia.org… Hey, ever heard of that? Wikipedia basically says that he’s semi-famous, he’s old, and he even gets to live in West Vancouver. In hapless prejudice I asked “Why would a very rich 45 year-old man want to try to write a best-selling book for young adults about video game industry shlubs?” But then I was talking on my Gmail Messenger… Ever try that? I did, and I learned that Ol’ Dougie wrote this hugely important book Microserfs; it’s from 1995 and about Microsoft-ish employee twenty-somethings etc., back when Sony Playstation 2 – Oops, I mean Microsoft – was just starting to really get its horns. Then it’s a lot of blah blah blah (insert electronics, fast food or popular recording artist reference) blah blah, and now here we are, everything makes sense. It’s just like when Jesus came back. Burger King. jPod. Uber-Vancouver everything. Video games. Moms selling weed. Bikers. Human trafficking. Everything that’s wicked right now. Nnnnhhhhhhhhere goes…

Episode One: John Realises 13 Weeks Is A Long Time

They introduced their main character midget with standard first episode stuff: “I’m Ethan Jarlewski, and I work at jPod,” and jPod is supposed to be a quirky/dysfunctional development department in a bastard rip-off Electronic Arts. Real EA offices probably look more like the perfect union of an ESL school and a Weight Watchers with just a pinch of comic shop, but this is prime time Canadian television and authenticity must pay. Then the midget’s mom kills a biker. She has a grow op. Some poor acting happened.

It went to the titles and that was Helvetica, little colorful squares, stick figures capoeira dancing, a futuristic theme song. Then more character introduction; video game programmers racing RC cars, the one girl called the other guy a butter monkey, another guy took off his shirt, the guy from the other bad Canadian show is wearing a turtleneck, CGI. And while it was painful, I needed to hear the Arcade Fire or something, or maybe a David Suzuki cameo. Then for no reason the screen said “Energy Bar, calories 300”, and they introduced the whorish character, Bree. She’s the token black guy, and in real life was voted “Sexiest Woman in the World 2006” by FHM Magazine in Asia. She bought a bull whip off the internet, and that meant it was time to introduce Alan Thicke.

He’s the dad of the midget and he’s an extra. He’s no Gervais by any account, but he plays an OK extra. He’s Alan Thicke, he looks pretty good, has a cool hairdo. It was like Growing Pains all over again, except the Kirk Cameron character had been shrunk way down. Meanwhile back at jPod, the rest of the kids are saying google, Google or googled over and over and over. Then more Alan Thicke and out of nowhere, a gift. I hear a little twang, and what’s that? The Tragically Hip?

So jPod’s super bummed because their new boss wants to bugger with the video game that they’re working on. He wants to incorporate a cartoon turtle which has something to do with child porn, so the jPod are super bummed. Then they were walking in Stanley Park together. They were walking in Stanley Park and the midget and the ex-teenage mom start to do that thing in shows where you know they’re going to screw — in film it’s called foreskinning. Some other things happened and the midget and the ex-teenage mom are back at his apartment, and she’s about to let the midget give her another teenage baby in the butt. Midget goes in for a kiss, the lights go on and there are 500 or so filthy Asians staring at the both of them. The midget does a WTF, and the show’s over. More foreskinning, diggit?

I’m going to have to say something now, and I’m a little shocked that it’s come to this. It was definitely better than I had hoped. Not to say it was any good, but it’s almost up there with Doogie Howser, MD. It has the same theme song and main character, except both are a lot shorter. It was just sub-medium, and please, please, please, shit had better get a whole lot worse; a karaoke scene, Matthew Good playing an acoustic set, anything! Because things keep going on like this and I’m going to have to start making shit up.

Next week: John Realises He Shouldn’t Have Thrown His VCR Away or What Are 500 Filthy Asians Doing In The Midget’s Love Hole?!