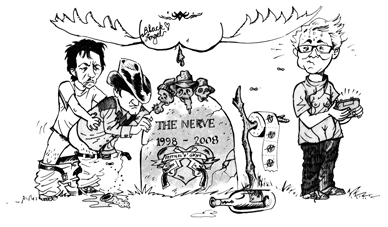 OK, so none of us have actually been to a Nerve Magazine staff meeting, but the ritual is so storied and steeped in lore that we were almost able to reproduce the above image from memory. Sadly, we’ve missed our chance to join in on the fun. After ten rawkin ‘ years in print, those days are over… at least for now. According to a semi-super reliable source The Nerve, Vancouver’s lone resource for urban cowboys and purveyors of filth and fury, has stopped printing and has gone on what one insider calls “an indefinite publication hiatus.”

For the last decade The Nerve has served this town and country as a defiant dumping ground for rock journalism, “employing” virtually every monkey capable of spelling the word “balls” and covering hundreds of bands that nobody listened to in reviews that nobody read. But it wasn’t all rock reviews and funny hats. While boots and booze filled their pages, the notoriously hard drinking magazine occasionally showed a softer side, providing a lone voice for the marginalised Rockabilly community. Not satisfied with simply being trend setters and image makers, they also gave back to the community with their annual Booze Cruise, where friends and fans (mostly friends) got on a boat, got drunk, listened to The Nerve house band Crystal Pistol (for three years in a row… ingenious) and still had such a shitty time that they usually wound up filing a lawsuit. Known around the city for their zero standard approach to publishing, this brave business model also applied to the organizing of their Festival of Guns, a boisterous affair that brought together more yahoos, rednecks and tattoo artists than was ever thought possible. While it’s not quite right to say we’ll miss The Nerve, it had its place and did its job. It gave all those rowdy, drunken louts who wanted to a place to write, and now that it’s gone they’ll just be left yelling in your face. A memorial wake will be held at The Buffalo Club on Tuesday, January 15 featuring Skookum and Crystal Pistol, followed by a “Help Pay Our Legal Fees” fundraiser, also at The Buffalo Club.