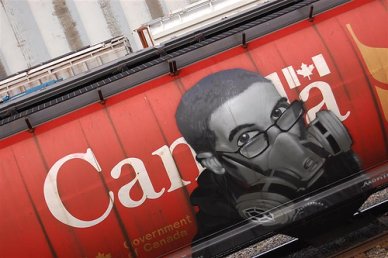 ONLY’S WEEKLY WEEK IN REVIEW
– Most importantly, the video of the guy getting tasered was released to the public. This damning video will undoubtedly result in the abolishment of tasers by all Canadian law enforcement, the expulsion of the four offending RCMP officers and the payment of millions to the poor mother of the victim who lost her son all because he was a little nuts and Polish. Or at the very least, the exact opposite of all that stuff.

– Dave finally made his way to an actual restaurant, and unless you’re some weird, wonton loving mop-topped hater, you probably feel like eating there right now.

– Shindig semi-finals began. For the first time ever, we feel completely obsolete and useless at this thing. We’ve only disagreed with the judges once in ten weeks!

– After a six month pilgrimage to Borneo, Rhek made a triumphant return with a characteristically hilarious interview with a guy we never cared about before.

– Even we have a hard time believing Beowulf was a good movie. And we saw it. Seriously though, good times, but only in 3D while stoned… But under those conditions Transformers would have probably been a religious experience, so… Fuck it. Go see No Country for Old Men instead. That’s the best, most violent film we’ve seen in our entire lives.

– Chloe went out and did some stuff. We’re pretty sure her work speaks for itself.