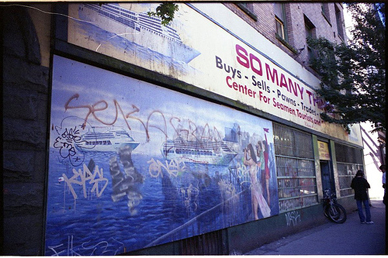 ONLY’S WEEKLY WEEK IN REVIEW
– If you read that incredible Dave Beers article (it’s a must read if the word “incredible” didn’t give it away) and then combine it with that thing Sean wrote about homelessness and how it’s a complete national disaster that’s never going away, you might get scared and think that you’re about one late pay-cheque away from becoming homeless yourself. And you know what? If that thought even crossed though your head for one split second, you should just move back in with your parents right now because this city is going to shit.

– Amil got sick of getting tricked into not being able to have kids whenever she wants and got to the bottom of it. But secretly, she’s just got super heavy flow and needs something to chill that shit out… Just jokes.

– Although by now it already seems like ridiculously old news, way back on Monday that saga of Ellen and her dog Iggy was the most important historical event since Jesus died.

– Yeah sure it was a super short interview, but whatever. Petroleum By-Products aren’t old enough to have a bunch of important stuff to say yet. They just make the best music in the city, and we’re not fucking around.