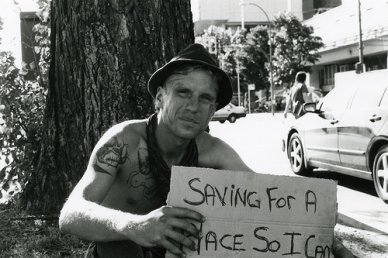 Last week, the Georgia Straight ran a brilliant cover story called Gimme Shelter about the struggling renters market in Vancouver. It’s not just skating on some “Homes Not Games” rhetoric either. The article describes the existing market, where you have to earn “$13.48 per hour just to be able to afford the average bachelor apartment in Vancouver.” A cost that is regularly increasing. It’s an important story to tell, but is unlikely to do much for the situation. Every person in this city with enough power to make a positive change seems hellbent on developing a Utopian consumer village, with couture on every corner and rows of towering glass columns that reflect our carrot-on-a-stick landscape.

What was a surprising editorial decision however, was the choice to also insert their seasonal LiViNG magazine into this issue. The 40-page glossy is so full it’s vomiting ads for high-end condos, furniture stores and restaurants. This is accompanied, of course, by a myriad of diverse articles on topics such as designer furniture, what sort of high-def wide screen TV you should buy, and how condo-hocking mogul, Bob Rennie, made his fortune by marketing condos with a West End feel in a shitty neighborhood. It’s not that it was wrong to include this little rag within the bigger rag, just a stupid one.

What could better highlight the paradoxical character of this city than its old “hippie rag” addressing its readers as citizens, but at the same time treating them as consumers? How can the Straight lament over the sad story of the chubby but beautiful low income housing market who received a gastric bypass so to appeal to a better-looking, financially-endowed man, while simultaneously promoting the very shallow, consumer lifestyle that lead the poor thing to the surgery table in the first place? It’s just ironic, that’s all.

It may not be immediately evident that the Georgia Straight is in part to blame for the Yaletownification of Vancouver, but through its active promotion of such an unsustainable, materialistic way of life in features like LiViNG, how is one to assume otherwise? The reason the article isn’t going to make a lick of difference in this city is because its population is more consumer than citizen. And the Georgia Straight has contributed to this transformation. Citizens seek to better society as a whole through dialogue and political interaction, consumers seek to upgrade their dining room set.

Can magazines like the Straight both run great articles for the social good and actively promote the kind of lifestyle that numbs society to do anything about it? Look at the homelessness problem in Vancouver. We, as citizens, have had the ins-and-outs of this permeating issue analyzed and described to us at length, and what has happened? Nothing. But if the homelessness problem somehow prohibited us all from buying a new pair of jeans, surely some action would be taken. So, can we have it both ways? Of course we can, we all just look like assholes when we pretend to give a shit about society’s problems.

Check out more of nofutureface’s photos on his Flickr site