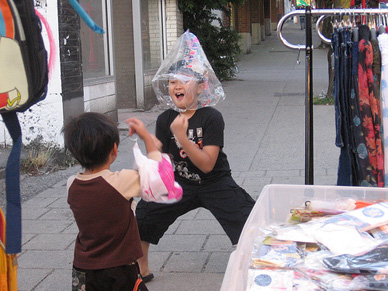 - Hindle went on a blood thirsty Fringe binge, sexing up actresses, drinking like a dolphin, and reviewing a total of 16 shows in a mere five days. For the drama geek in all of you, rounds one, two, three, four and five.

- Vice premiered their first ever feature length film at the TIFF, but all we could think is that they were a lot more fun back when they used to hate everything.

- Blitzen Trapper’s Eric Earley told us that he wrote, produced and played all the instruments on every song off Wild Mountain Nation, which still seems impossible.

- “Lighthouses rule” became our new favourite thing to say during sex after we watched that Dan Deacon/Liam Lynch video a brazillion times.

- We paid tribute to the victims of 9/11 by publishing a review of Deborah Eisenberg’s “Twilight of the Superheroes”, which apparently mentions 9/11.

- The three-month-long spectacle that is Shindig kicked off this week. Only jokes for beer? Two for two y’all!

- Kanye gave himself the Justice treatment, and released our favourite rap video of the year.

- We discovered urine powered batteries, and then got reminded by one commenter that we have absolutely no use for them.