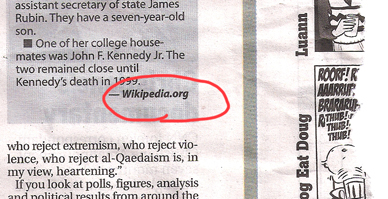 On Tuesday, August 21, 2007, the CanWest empire ran an editorial in a number of their publications entitled Internet Skulduggery Lesson: Let the Readers Beware outlining the oft discussed pitfalls of information gathering in the age of the internet. With Wikipedia and social networking sites so commonly used, the information you receive and the people you meet may not be what they seem. The article asserts that “[people] using the Internet for research purposes should… check and double-check facts through a variety of sources.” They point out that “some of the ‘information’ on the Internet is not exactly 100-per-cent reliable. Some of it is lies, some is nonsense.” Sound advice, but as it turns out, some of the information in print is “not exactly 100-per-cent reliable” either.

On the same day, the Province (a CanWest owned paper) ran an article about CNN correspondent Christine Amanpour’s seven-month journey around the world to make the 6-hour documentary God’s Warriors. In the half-page article, they include an “Amanpour at a glace” box filled with little tidbits about her life. And where did they dig up these tidbits? Famously unreliable website Wikipedia.org. Which begs to question, if CanWest were to follow their own advice and “double-check facts through a variety of sources,” would they not have cited a more reliable one than Wikipedia? It’s somewhat ironic that CanWest would run an article about an investigative journalist and the grueling work she does, and go no further than Wikipedia to gather information about her. On the same day they publicly decried such activity. Funny. Just like a newspaper should be.