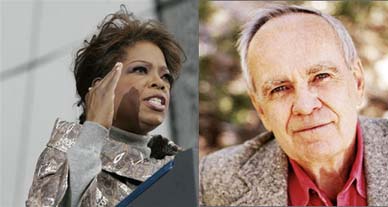 In his second ever interview, old world author Cormac McCarthy will be interviewed by Oprah this evening. The man responsible for some of the most brutally violent, nihilistic and existential writing of our modern day, the man who shuns academia and all its pedantic deceits, the man who has lived close to poverty his entire life refusing to get a day job, the man who was awarded the MacArthur Fellowship (genius grant) while living in a room in a motel run by his buddy, has granted Oprah Winfrey the second interview of his life. Fucking Oprah!? Cormac, are you serious?

What are they gonna talk about? I’d wager they’ll manage to bring up McCarthy’s new book The Road which Ms. Winfrey has very wisely chosen for her super-duper book club and which was just awarded the 2007 Pulitzer Prize for Fiction. Dude wouldn’t even show up to the ceremony to receive one of the highest accolades in literature but he’ll gladly hang with Oprah? It seems completely absurd and yet somehow awesome. Make sure you watch — it will be interesting. Oh, she also has Michael Moore on the same show.

Oprah is on today at 4pm on CTV