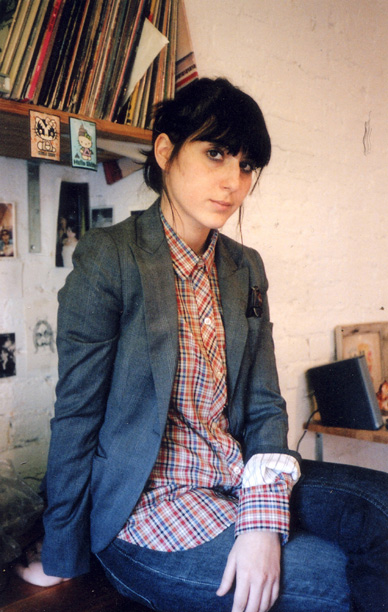 In the space of not many years, Lesley Arfin has gone from writing “I’m the ugliest person ever” in her diary to having Marc Jacobs describe her beauty in i-D. In between those rather polarizing life events, she discovered boys, punk rock, raves and drugs, got her own Vice column, became a heroin addict, hit the Betty Ford Center and lived to tell about it in my new favourite book, Dear Diary. The book is a collection of diary entries, ranging from 1990 to 2003, put into context through updates and interviews with people from her past. Lesley and I talked about everything from silver foxes to living life on a ‘natural high,’ but mostly I just tried really hard not to ask her to be BFFs and invite her over to play Girl Talk.

ONLY: In the book, you make reference to hooking up with Leo Fitzpatrick from Kids. What base did you get to, and are you sure you guys aren’t soul mates?

Lesley Arfin: What base did I get to? Sloppy third. It was really fun! I didn’t mention that in the book because Leo and I are still pretty good friends and I just didn’t want to invade his privacy. I see him so often that I thought: “Well, I don’t need to put that in.” You know? He’s my friend, and I just wanted to respect that. I don’t think we’re soul mates.

LA: He’s an awesome guy. He’s smart, he’s funny, he’s nice, he’s very cute and he’s a great person, but I think that he and I are just meant to be friends. I know, it’s sad but true. He is super cute…

LA: Especially now, when I see him. His hair is peppered with grey. It’s so striking.

ONLY: If you could go back in time to any entry in your diary, which would you choose and would you tell yourself anything?

LA: Well, you know, on one hand I think I would go back to a lot of places and tell myself things, but then on the other hand I don’t know if I would want to change anything, you know? ‘Cause I wouldn’t even wanna fuck with the person who I am today, in any way. I like to maybe think that I could offer myself all these different pieces of advice, but I don’t even know if I would… I wouldn’t want to tamper with life in that way.

ONLY: Now that Dear Diary is widely available, has anyone you wrote about approached you with regrets about how they were portrayed?

LA: And then I wrote about Stu Wildstein, and I loved what I wrote about Stu, but I don’t think that his brother is that happy. I almost wish that I could have explained more, like, that I thought he was such an amazing person. I thought he was such an amazing character. I don’t know if that translated so much in the book. But I try not to think about that too much. And, I mean, in terms of the interviews and other people who might be upset with me, who haven’t told me, there’s nothing I can do to change it at this point, so I try not to go to that place. But if anyone’s feelings are hurt, I definitely empathize and my intention was never to hurt anyone’s feelings.

ONLY: There are numerous references in the book to people who didn’t make it. Looking back, does it ever surprise you that you actually survived your own life?

LA: You know, it’s so funny because I was talking about this the other day with some people who I went to high school with, and the shit that went on with all our friends is just crazy. Like, so many people in our school died. There are even more people who died that I didn’t write about just because they didn’t come up in my diary, so I didn’t put it in. I am shocked. I mean, we used to drive around fucked up all the time and I had this feeling of being invincible, and I’m very surprised that I’m still alive and that certain people are still alive. Yeah, I mean, I guess someone had to survive it to write about all of it.

ONLY: Do you think that you really look like Harmony Korine, or do you think people are just trying to fuck with you?

LA: I think I’m prettier than Harmony Korine, personally, but my editor, Gavin, constantly tells me I look like Harmony and he definitely does it just to fuck with me. But you know, it’s funny. It doesn’t bother me. I don’t think that I look like him, but there are similarities…