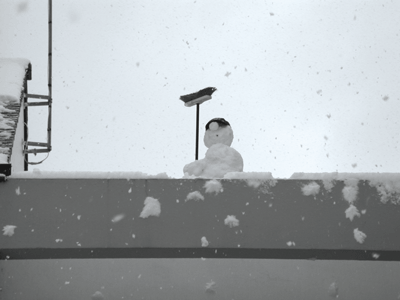 The Economy According To The Monopoly Guy

The Loonie is now so fat it’s actually dragging the economy down. Inflation dipped a tenth of a percent and is unlikely to change for, oh, a few weeks. Even places like Korea and Europe are buying Canuck bucks and feeling pretty damn proud of themselves. Whether or not the economy is actually that strong (are you in a good place?) the perception is positive and when it comes to national budgets, that’s the key thing. Evil Billionaire P. Martin has decided we now have enough money floating around to feel paranoid, and is giving twelve billion dollars to the Canadian military. Top army brass are delighted, although unsure what to do with actual money and are considering training soldiers on how to chuck loonies and toonies in a lethal manner at enemies’ heads. Later they’ll hold conferences to decide who might make a nice enemy for us. Corporate tax has been reduced and even The Plain People of Canada will now only pay tax after they’ve earned ten thousand dollars, as opposed to the eight it was previously. Congrats! Now you don’t pay unless you are making a whopping eight hundred clams a month. Remember when you only made six hundred? Wealth’s nice, isn’t it?

We are now, officially, a fat cat country. We’re stinkin’! Rolling in filthy lucre. KOREA is buying our money! So let’s come up with a budget which better reflects our new pinstripe serge, stretch limo, summer cottage image, shall we?
$12, 000,000,000.00 for guns and bombs? What for? America will protect us! They are also the most likely folks to get us killed, but how reassuring that our worst nightmare is also our protectorate. In fact, the more terrified and paranoid the US becomes the more weapons and crazy defense satellites they’ll build and therefore the safer we’ll be. So let’s spend the dozen B-notes training all Canadians to become terrorists! Thirty million berserkers living within a hundred miles of the longest, undefended border in the world will drive the Yanks safety bonkers and leave us in a cosy snuggle of defensive fervour.

Next, let’s cut all the rest of these silly health care, education, welfare and human-interest ministries. Obviously the reason we’re so rich is because we are pandering to the lowest Hobbesian denominator. Gordon Campbell shut down the provincial Human Rights Commission because human rights are too expensive, and look at the glowing sunsets we’re getting now on those TV commercials! People are snowboarding, man!
They’re fly-fishing, driving Subarus, building massive houses with Italian fitted kitchens and swapping their old, ugly children for fresh scrubbed cuties complete with ipods, who drink vitamin C-rich orange juice like it was candy. Two thirds of companies, all the biggest ones, obviously, haven’t paid taxes in years and now their kids guzzle citric nectar while kayaking in the mountains at the splash of dawn. It’s in the fucking commercial, dude! Obviously, this is the way the real world works.
Yessiree, this budget is like finding a diamond the size of a lumberjack’s fist, or a microcephalic’s head, stuffed inside your Christmas turkey.

Let’s reupholster the nation’s duck population with silk feathers! Let’s pluck every tree and use anti-baldness technology to inject tufts of luscious auburn hair into the branches so children can brush them like ponies. They can braid forests and tie bows on boughs and we’ll turn what’s left of BC’s interior into a petting zoo.

Most importantly, whatever we have left that’s our own we must sell to the States. Every penny will go towards Canadian-style weapons (gasoline-soaked Molotov snowballs, suicide beavers building dams with dynamite, and BB guns loaded with black-eye peas), drive the superpower mad with skittishness and ensure a glorious, safe, loonie-plush future.