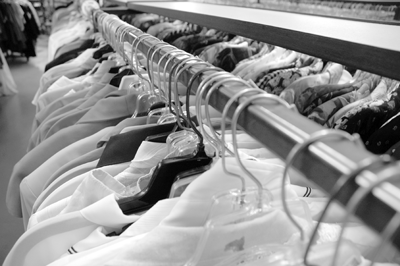 I want to wear what you wore

When we were young we used to hide under the racks of clothing at the local Mennonite thrift store and Bi-Way while our mother would pillage the bins grabbing piles of t-shirts and leggings for under two dollars. Goodwill used to sell by the pound and amongst the yellowing denim and mystery-smell socks, were usually tweed pants hemmed to perfection and multi-hued B.U.M Equipment jumpers.

She bought in bulk because it was cheap and she bought used because it was really cheap. Carrying that thriftiness over, most of us rummage through the dusty stacks of gently used clothing at the Value Villages and Sally Ann’s scattered through the city. To a soundtrack of Beatles and sock-hop classics, our teenage years were spent in small-town basement thrifts.

Plumping those lacy slip collections to an impossible-to-ever-wear-them-all size, we even managed to lug home stuffed, oddly scented Safeway bags almost daily without breaking that tiny fast food employee budget. Occasionally, sneaking into the Pro-Life shop, leaving with a guilty conscience and a whole bundle of garments for less than a buck.

Usually favouring the church-basement-only-open-Thursdays-from-noon-to-two style with an everything costs 50 cents pricing system. But if you’ve been bargain hunting lately, you’ll have noticed you’ve been priced out of the market. A perfect day used to be wake up with a hangover, have a greasy breakfast, and score some great stuff for cheap.

Now a trip to the thrift store leaves one filling ripped off, with a sinus infection, and sore dusty eyes. For those who thrift for fun, the whole experience is exhausting and worthless, but for someone who thrifts out of necessity, the poor selection and inflated prices means paying out the ass for dirty sheets.

If you were ever brave enough to wear multi-coloured polyester kaftans and floor-length wrap skirts, a trip to VV at one time felt like winning the lottery. Now that the psychedelic haberdashery has been thoroughly picked over all that’s left are grubby white vinyl shoes, spandex jeans that pucker in all the wrong places, and long johns. These are items people get rid of because they’re soiled, ripped, unglued, and moldy, not because they think someone out there could use it.

You went for the items found in the pockets, the forgotten money, expired gift certificates and random soot. Now you feel like a petty thief every time you switch tags, “exchange” and “borrow” goods and tear-bargain with the unrelenting staff. Watching trained pickers scour the aisles with overflowing wallets and meaty paws scoop up the once rare finds only to be amazed by the seemingly low prices is infuriating. And if you’re wondering where those items are disappearing, clothes that don’t sell within some arbitrary timeline are hauled off to the rag yards and pruned over by vintage stores eager to increase the markup already bleeding you. The reason we don’t go to Aritzia is because we have a genetic aversion to mass-produced t-shirts priced at $50, but our havens have disappeared, leaving us shelling out $20 for a pair of used short shorts. The shit’s fucking cheaper at shit-ass Old Navy than most of Vancouver’s shitty thrift stores. Who wants to train out to Surrey or Maple Ridge just to hound around from town block to town block looking for an old pair of leggings you should be able to pick up in your neighbourhood trashcan?

But the bullshit news is, like a cheap wine, if we tell you the only decent shops left to go, those deals too will disappear. The communal spirit of sharing a good purchase or spotting a good sale has become a catfight to maintain shopping secrets. You’ve heard those lies before, “I can’t remember where I got it” or “I found it in an alley.” Keep your locations hidden, because we’re looking and we’re ready for a fight. -

If you know a thrift store that is still cheap and has good scores, please contact us