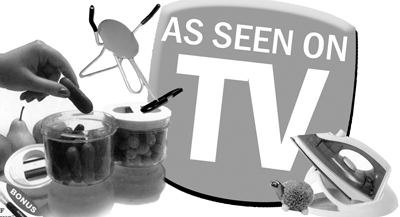 The revolution will be infomercialised

Before EBay, Amazon, and Shoppers Network there were K-Tel, Kraft Foods, and late night television ads featuring used-carpet salesmen afflicted with worn-toupees trying to unload leftover rolls of mouldering shag. Or second-hand cars, or spray-on hair, or leather-patching kits, or crazy inventions promising to relieve humanity of the nightmare of doing…whatever; storing their shoes, folding their underwear, washing their children. A gullible public desperate for the glamour and sophistication of being the first in their neighbourhood to own a combination fondue/cotton candy spinner bought everything on offer, simply because the almighty glowing box told them to.

The thing is, somehow, what should have been a soul-destroying epidemic of economic slavery became something more. A miraculous wormhole was opened which tapped into an alternate universe of cool shit and brought it all to our eager, grasping hands, and the world was a richer place.

Chia Pets shaped like llamas and your Uncle Leonard’s head growing alfalfa. George Foreman and his torturer’s apprentice kitchen appliances wringing grease out of slabs of meat big enough to split your colon. Double albums from favorite bands you’d never heard of. Casseroles combining Cheese Whiz, Miracle Whip, marshmallows, macaroni, and dish soap; an entire generation of us were forced to endure recipes concocted by bored, stoned Kraft Food employees in what must be one of the greatest cuisine scams in history. For millions of people who apparently made spaghetti sauce using both chopped tomatoes and tin cans there were Ginsu knives that would not only outlast the user but in fifty years could still slice a mango. The need to consume without wasting calories, to buy unneeded stuff without unnecessarily burning fat by walking down to the store to pick it up, lead to a shoppers’ revolution of cheesy infomercials all narrated by the same, mellifluous, mesmerising voice… “Buy, buy, buy. But wait, there’s more!”

It was wonderful. It didn’t seem like consumerism at all. This stuff was all too bizarre to constitute a capitulation to capitalism. Looking back now the whole “as seen on TV” phenomenon was the only promise of a trouble-free future that came true. Why couldn’t some enterprising crackpot have invented personal jetpacks back then, so we could all be zooming around our floating bubble homes now?

The future is still now. AsSeenOnTV.comâ€‰– “If You’ve Seen It, We’ve Got It & More!” has somehow compiled every single crappy, useless, so-vital-you-must-get-it-this-instant trinket imaginable and puts it all on one site for your drooling, visa-depleting pleasure.

Just listen to some of the treasures available: Replacement mini rocket rear brakes, The Art of Garnishing Book (illustrated), the AB Revolutioniser (What is it? Who cares! It revolutionises! Get out of the way of progress, y’old fart!), the IGIA Epil Stop & Spray Cucumber Melon, Richard Simmon’s Slim Away Everyday, the Ronco Food Dehydrator, The Chillow, The Eggstractor, “Lovers Caught on Tape 3”, and many, MANY more!

Really? Like what? Well how about a Bionic Minnow, The Bug Vacuum, “Matthew Lasko Shows You How To Find Money FREE- Plus 3 VHS Tapes”, The Fire-N-Ice-Heating-And-Cooling-What-A-Chair, Heart Tops Nipple Covers, and….Zylogen!!!

But wait! That’s still not all! Over 1200 items float on your screen, itemised alphabetically in a seemingly endless list, each more pointless and beautiful than the last. One theory of Art holds that the more useless an object is the more its existence can be justified as Art. Granted, the theory generally also demands the object be viewed within the context of a gallery space. What if, though, that definition was to be stretched to include, say, a television or computer screen? Or perhaps even further. So far the gallery boundaries are completely forgotten. Like to the boundaries of your mailbox six to eight weeks later, next to your red ink credit card bill? These items have the purity of avante garde Art (Really, what practical use could you ever put a poodle-shaped Chia pet? Did you used to shave the alfalfa and sprinkle it on your salad? If you did I hope you never got to own a real dog when you were a kid) but occasionally— though only occasionallyâ€‰–â€‰a utilitarian genius as well.