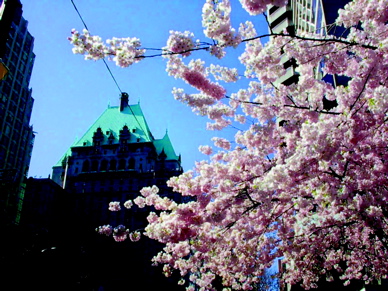 THIS IS ABOUT THE HOTEL GEORGIA. Built in 1927, it is one of Vancouver’s grand dames, ticking away the decades with its sister across the street, the Hotel Vancouver. The Hotel Georgia has just closed for a few years-worth of redecorating and redevelopment, prompting the press to spend a little time reminiscing and shining up the fact that the Hotel Georgia was the first major hotel to welcome black guests in the late 1950s. Wait… Vancouver hotels were banning blacks?

Today we pride ourselves in being cosmopolitan, horrified yet bemused at what bumpkin Americans were doing down south before the civil rights movement. But your Grandma and Grandpa were just as bad. Probably worse.

Consider the Park Board. Our elected Park Board. They banned Chinese residents of Vancouver from swimming in public pools until 1947, the year Canada deigned to give Chinese-Canadians the vote.

Consider the British Properties. Those posh mansions in North Vancouver were built by the Guinness Family, the Guinness Family of beer-brewing fame. They owned–and still own thousands of acres of North Shore property on which they’ve built slowly creeping mansions up the hill since the ‘30s. Every single one of those original mansions, to this day, has a covenant on their deed: No selling this property to Jews or non-whites. They also built the Lion’s Gate Bridge.

Consider the Komagata Maru, a ship carrying 376 passengers from India to Canada in 1914. Like all Canadians, Indians at that time were British Subjects and theoretically equal under His Majesty. Vancouver had other ideas and used the Vancouver police to prevent entry into the harbour. The passengers held on nearly three months, sitting in English Bay, before the ship was forced to turn back.

Consider the First Nations who, like Chinese-Canadians and Japanese-Canadians, were not permitted the right to vote, to hold public office, to serve on juries, or practice as pharmacists, lawyers, or accountants. White lawyers were barred from representing First Nations persons because, as the theory went, the Indian Affairs office in Ottawa looked after all their interests.

Consider Hogan’s Alley. This was a street in Strathcona that ran from Main and Jackson between Prior and Union. This was Vancouver’s black neighbourhood, home to black-owned shops, homes, bars, and the African Methodist Episcopal Fountain Chapel. You don’t see that neighbourhood any longer because the 1960s City Council put the Georgia Street Viaduct right over top of it. The residents were not consulted.

Consider the White Lunch. This famous–but long closed restaurant chain had locations throughout Vancouver. According to Vancouver historian Michael Kluckner, in his book “Remembering Vancouver”, the “white” in restaurant names meant that the kitchen did not hire Chinese cooks. There were other restaurant chains with White in the name.

The Deep South had institutional racism–institutional in the fact that the legislatures of the various states passed laws barring blacks from occupations, from schools, from public transit. People who lived there back then can, decades later, claim that they were against this discrimination but, “what can you do? It’s the law.”

But in Vancouver? We know First Nations, Chinese-Canadians and Japanese-Canadians were discriminated by law. But black people? Banned at restaurants? Barred from staying in Vancouver hotels? When the Hotel Georgia allowed those first black guests, they weren’t violating a law of a racist legislature. This was a voluntary ban, voluntarily enforced at hotels and restaurants. Forty years later, the Hotel Georgia get accolades. So goodbye, you grand dame. We’re better off for the lack of you.