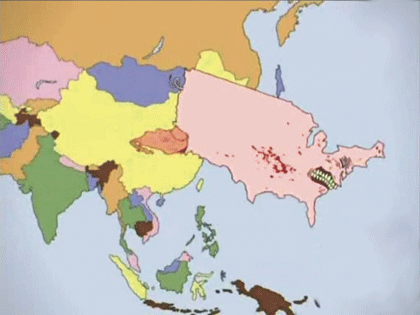 The economy won’t save us It’s the economy, stupid. The mantra created by James Carville that shaped President Clinton’s second term win espouses the firm political belief that if the economy is strong, quality of life will follow suit, and everyone will be happier… or at least those most likely to vote will be. And to a degree this might be true. But seeing as how we all vote, and we’re all increasingly less happy, it might serve us well to reassess this standard.

Right now, Premier Gordon “Hawaiino” Campbell is polishing some Chinese relaxation balls in Beijing in a desperate attempt to strengthen B.C.’s ties with the world’s fastest-growing economic superpower. The key to this arranged marriage is Vancouver, which is being lauded as the West Coast link to the Far East.

Look at your shoes. Made in China. Look at your iPod. Made in China. Look at your cock. Made in China. Now, look at your government. Don’t be surprised if you find the ubiquitous slogan of capitalism branded Campbell’s ass the next time you flip him over.
But aside from a massive influx of shiny balls, dolls and sprawl, dollops of wallets, fidgets and midgets, what will closer ties to China actually mean for Vancouver? Well, if you’re a freewheeling and dealing consumer, it’ll mean cheap and wasteful goods and good times getting wasted. If you’re a rich Chinese entrepreneur, it’ll mean one more condo to buy and leave empty until real estate values and homelessness double. If you’re the Dali Lama, it’ll mean one less place to hob knob with celebrities. And If you’re a poor Chinese labour worker, it won’t mean a damn bit – most of your family already suffocated in shipping containers trying to sneak into the city.

But how ironfisted is China’s reacharound on our city? Well, Provincial transportation czar Kevin Falcon went on record praising China’s complete absence of labour and environmental restrictions, joking that without public consultation or mounting opposition, he could simply green-light the Gateway Project highway expansion and pave over houses. As our politicians kneel to the shaking of China’s fly, what does Mr. Campbell suggest we do? “We simply need to reach out and to grasp it.” It’s the economy, stupid, and we might do well to get in on the ground floor.

Economy 101: Upper management of large corporations, having bought or crushed all the small companies and cornered every market, give all the profits to their executives and shareholders. Having convinced their national governments they shouldn’t pay taxes because it hinders profits, they still fall into debt because of the executives’ pay packets. To stay afloat corporate America has borrowed heavily, accruing debts eating up 30% of their revenue in interest payments. To scrounge pennies, they sack the staff and outsource the jobs to China, thus producing, say, Odour Eaters much cheaper, but selling them for the same price. Pure profit. Yet Big Business, creating waste, underemploying, and requiring federal handouts the tax-cutting government can’t afford, has effectively produced an empty economy. Hence the downwardly spiraling “quality” of middle-class life, accompanied by the ever increasing dissention and the need to scare the shit out of people so they will stop asking questions. Meanwhile, the captains of industry sneer that public services are inefficient and should be privatised to make more money… for the executives.