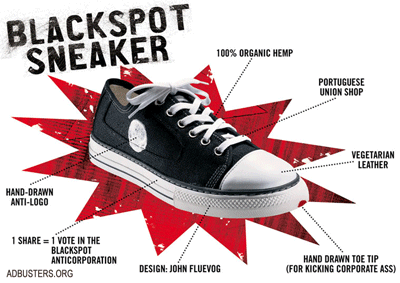 “No mindfucking ads. Just sustainable, accountable companies. Run by us.” –from an Adbuster’s ad

Kitsilano-based Adbusters has gone to the dark side. What was a magazine focused on deconstructing advertising has become everything it once hated. What was once the house organ of a movement has become a focus-group for twenty-to-thirty-year old early adopters. Adbusters has become a brand, and like Crystal Pepsi or McDonald’s Pitas, it wants to extend it.

Adbusters noticed you kids like the Converse shoe, particularly the Chuck Taylor in all its black and red goodness. You kids may or may not know that Converse is owned by Nike and as everyone knows there is no bigger example of badness than Nike. Not even paedophiles.

This is obviously a joke. It is the kind of thing that gets the media all aflutter, so then the master mischief-makers can point and laugh and say, “Ha! Made you believe that everyone is eventually a sell out!” After a decade and a half, Adbusters has eventually sold out.

The shoe is made in Portugal by a respectable company that hardly ever sells its employees for dog food. Adbusters touts the reasonableness of their factory choice in their marketing material. “The work day is from 8 a.m. to 6 p.m,” says Black Spot’s website, advertising the ten-hour day as a feature of their shoe. Also, the workers who make the shoe make 420 and 700 Euros per month ($600 – $1000) for a senior worker. A recent ad in the Georgia Straight advertised an entry-level editor position at Adbusters at $2500 a month.

But Adbusters knows that its market won’t respond to regular brand advertising. You are not buying a foreign-labour-made knock-off shoe, you are buying a share of an “anti-corporation.” You see, each shoe gives you a half-share in the Black Spot Shoe anti-corporation. What is the difference between a corporation and an anti-corporation? In a corporation, as a shareholder you are entitled to vote for the board of directors, voice your opinion at annual general meetings, receive accurate and audited quarterly financial reports and can pool your shares with other like-minded people to transform corporate policies. In an anti-corporation, you get to take part in a web forum while CEO and Adbusters editor Kalle Lasn does whatever he pleases.

The Black Spot Shoe Company is merely a division of the non-profit Adbusters media foundation, Kalle Lasn, prop. (Assisting Mr. Lasn on Adbuster’s three-member board is his photographer pal and his lawyer.) It is answerable to no one and, as a non-profit, has no requirement to pay income tax like, say, a foreign shoe company.

“Imagine a chain of restaurants serving only locally-sourced food. Or an artist-controlled radio network. Or a consumer co-op for organic clothing.” — from the same Adbusters ad.

Adbusters doesn’t want to inspire business owners to create locally owned, locally controlled companies. It wants to replace well-established brand chains with their hipper brand chain. If you think it’s a joke, go back to the third paragraph. It’s not a joke.

Nobody is saying that the employees of Adbusters can’t make a living. If Kalle wanted to say, “I want to start a company that uses my ideals of Adbusters and demonstrates how it works in the real world,” well, Godspeed. Instead, he is using thousands of his cultural jamming automatons as an ATM.

Black Spot is creepy. Buy the shoe and sell your soul.