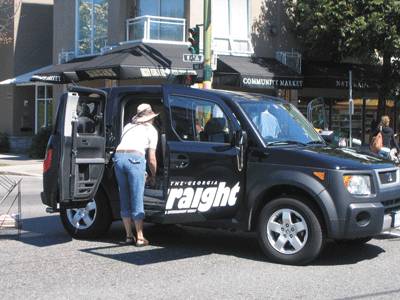 As Marcel Proust wrote in Ã€ la recherche du temps perdu, nostalgia is a rat bite on your crotch.

Nowhere is a more throbbing example than the Hippie Daze, a Kitsilano festival held during the second to last Saturday in August. In the late 60s and early 70s, Vancouver was a centre of excellence in Hippie science. They created Greenpeace, rioted in Gastown over pot, prevented a freeway from razing Gastown and Strathcona, and fucked each other at Be-ins until the herpes sores crusted over their nostrils and they either died or birthed you.

Kitsilano was where they all lived. Hundreds of huge, old houses were essentially abandoned by responsible parents who moved to the suburbs to raise their kids–leaving these monster homes in the hands of the Hippie. Some of them stayed for years, eventually getting jobs, raising families, buying the houses and eventually, in the ultimate betrayal, taking a bath. These people now own million dollar houses.

Hippie Daze is their way to relive their youth. Fourth Avenue is closed between Burrard and Vine to present a display they prefer to see: a stage with 50s music blasting, hula-hoopers hooping, and classic cars parked in the middle of the street. A giant sidewalk sale down each side keeps the crowd in the proper frame of mind.

Saying that Hippie Daze betrays everything Hippies ever believed in is too trite to deal with. That it is nonsensical requires a modicum of self-awareness that even David Suzuki wearing a David Suzuki Foundation jacket is incapable of.

Diagonally across town, the Storyeum has filed for protection from their creditors. Storyeum, the five-level theatre below the ground under a parkade in Gastown has spent $22 million to show, er… nobody, the musical history of British Columbia from the First Nations to the gold mining town of Barkerville to the creation of Expo to the opening of the Storyeum.

The quality of the show at Storyeum isn’t in question–you haven’t seen it either. It’s the idea that rather than actually going to a First Nations cultural centre, people believe there is a need for some Studio 58 grads to Ho-de-do a song about the creation myth; that rather than seeing the ghost town of Barkerville, people see a need to recreate it 40 feet below the earth, rather than visit an art gallery or the Art Gallery, people may prefer an accapella ode to Emily Carr.

The crime Hippie Daze and the Storyeum are guilty of, besides terrible taste, is to create a fake reality that distracts from a far better but less commercial reality. Car Free Day on the Drive attracted five times more people than the Hippie Daze Car Show and Sidewalk Sale. Protesters sent a freeway to hell thirty years ago, their modern counterparts plan to have the Gateway project join it. A five-level theatre slowly goes bankrupt below the ground under a parkade in Gastown. If this isn’t the age of Aquarius, what else could it be?