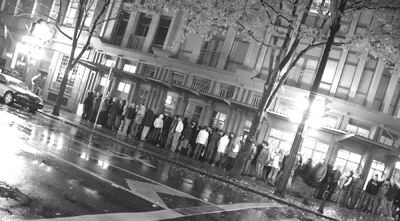 Standing on the corner like a bunch of gombeens

These guys are the best. Every weekend, a whole whack of these silly well adjusted types; the girls in the short skirts, the hockey jersey guy, the German tourists, they all line up and stand outside the Blarney Stone for a long ass time waiting for the folks to let them in to their little bouncing Irish oasis. Pissing rain or no, you can bet your mom’s arse they’ll stand there like a pack of gombeens, even stretching around to the methadone pharmacy on the corner on busy nights. (If these people’s parents knew!) And well, what’s all the stink about then? Is Soul Decision playing? Did Planet Love relocate? And how many girls from North Van could possibly hold their birthdays in the same place, on the same night like that? It’s ridiculous! What the heck? C’mon.

One time, Al Hindle, and our fearless leader, Darryl Atwater, went drinking down there just for kicks, and apparently they played this ancient Irish game where you had to fasten yourself to a bungee cord and try to touch some bottle across the room or something like that. Darryl won, then they got a coupon for a beer and there was a kerfuffle and some other things, and that all sounded pretty good to us, but are all these people just out to fondle the two litre, so to speak?

Only spoke to one of those dedicated little gaffers in wait for the glory and spoils behind those big men who stand in front of the doors down at the end of the rainbow of whatever, with the pot of gold…Hmnnn.

ONLY: What’s going on tonight?
Fella: Nothing.
ONLY: Why are you waiting in line here?
Fella: I’m waiting to get in the Blarney Stone.
ONLY: What’s going on in there?
Fella: It’s a girl I knows’ birthday, my friend’s are meeting me here.
ONLY: Are you Irish?
Fella: I’m part Irish, and some Scottish.
ONLY: Are your pals Irish too?
Fella: Some, I guess. There’s one guy that’s brown.
ONLY: Spanish?
Fella: East Indian.
ONLY: Do you know about this bungee cord game in there where you have to touch the bottle?
Fella: No.