We Built This [Terminal] City 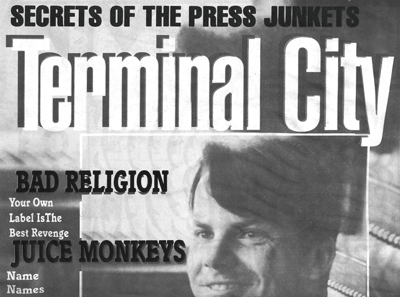 And now it is gone

Terminal City is officially dead. In most instances death is a horrible thing, and in some cases death is tragic, but in the case of Terminal City, it’s a relief. The deterioration of the weekly that many of us had worked so hard on for so many years was sad and painful to watch. What once was an often despised, sometimes venerated and always-reckless media stalwart, ended its life as a watered down mockery of the journalism it had set out to destroy in the first place. It may be hard to remember, but TC wasn’t always this shoddy. In fact, the paper that many are eulogizing now has only been around for just over a year. Terminal City itself has a history that goes back well over a decade, and just as one would do at the funeral of any former friend, we’ve decided to highlight some of those high points, and joke about the bad.

Terminal City was created by Darren Atwater thirteen years ago because he was bored of the formulaic principles behind most newspapers. He was also adamant to prove that you could just as easily lose money in the publishing industry as make it. Originally, TC was staffed by Josephine Ochej and a former Greenpeace campaigner named Brian Salmi. Atwater also persuaded an obscure advice columnist from a small Seattle weekly to contribute Savage Love to the paper and a guy named Tony Millionaire in Brooklyn to contribute a comic.

Under this team the paper unleashed ideas like the now infamous Brian Salmi revelation: “It costs nothing to run for office – let’s get 1,000 people to run for mayor.” After marshalling the entire resources of Terminal City, fifty-eight people eventually ran for mayor and, by the reaction of the city and the city’s media, you would have thought Terminal City was handing out free crack.

TC was investigated by the Vancouver Police for instigating the 1994 Stanley Cup riots, though the police decided against prosecution for fear it would give Salmi a public forum, allowing him to influence a wider audience. In 2002 Atwater and Salmi stormed the legislature in Victoria and were arrested for criminal trespass. Fortunately, the paper was set up with a bail fund. But its impact was farther-reaching than pranks. Tom Flannagan’s series on APEC and the subsequent attack by the RCMP on protesters at UBC kicked off the worldwide public resistance against globalisation. During later coverage of the Gustofsen Lake trial, the CBC used Terminal City reporter Ben Mahoney extensively because he was the only journalist to cover the trial. The Globe & Mail declared Terminal City as the “Only alternative weekly that mattered.”

Then Terminal City folded. Unfortunately you can’t keep a keep a sickness like this at bay very long, and in 2001, Atwater’s brother Graeme had the idea to start up?? Terminal City Weekly.?? This version, under the initial editorship of Jen Cressey, helped end George Puil’s career by blaming him and only him, in a Salmi piece, for the bitter bus strike which lasted four months. The editors of what is now Only started drifting in: Amil Niazi first, then John Cow, Alan Hindle, Sarah Albertson, Sean Condon, Rhek, Sarah Cordingley, Ben Lai and it was a new Gilded Age. Page size went up, an investor appeared and, in an entirely unprecedented move, staffers were paid. But the good life didn’t last long.

In a Gordon Gecko move by management to gain editorial control of the newly growing monster, Atwater was fired. The entire staff – less six – refused to work under the awkward new management, walked on the spot, and started getting drunk. Three days later you got Only. And you’re reading it now.

And now Terminal City is dead, again, but this time it’s Terminal City??’s last stop. It would be easy here to say something really biting, like how ??Terminal City slowly began to eat itself, hiring and firing editors and writers, leaving everyone wondering where it was going — but we don’t need to say that kind of stuff. They’ve got no way to defend themselves… And we’ve been reading their e-mails, and they’re sad.