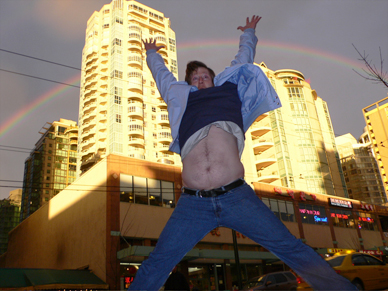 Being the narcissistic cockholes that you wish you knew just how much we are, the only year end list we were interested in creating was one that fed our already way overcoked egos. So let us return from our holiday hiatus by highlighting, in no particular order of importance, some of the more interesting events that transpired on this professional website over the past 365 days. There will never be another year like you, 2007. You were a dirty whore.

If any single word could sum-up aught-seven for us, it would be this: Femanism. Spawned by a seemingly innocent film piece outlining Quentin Tarantino’s secret agenda to forward the rights of women and other visible minorities, the popularity of femanism took off, surpassing even our wildest expectations. Sure, we knew the wheel had been re-invented (or at the very least perfected), but the last thing any of us anticipated was the coining of the new “Wuzzzzzaaah.” But that’s exactly what happened! In retrospect, it’s not very hard to see why. Just say it out loud. Femanism. Fe-man-ism. It’s more fun than saying “Snootchie Bootchies” ten times fast! Oh well, Adam may know dick about the movies, but the man can sure invent a word. Yaaaay Femanism!
LINK: Tarantinos New Femanism

We’re really starting to worry about Alan Hindle. No, it wasn’t when he tried to challenge us to a fistfight on the platform of Broadway Station because we asked him if he was going to get a Facebook account, or when he started talking about farming his own skin out to the needy. That was typical Hindle. But when we found out that he was actually a pigeon murderer, well, we saw him in a whole new light.
LINK: Winged Mutilation

We’re still erupting into uncontrollable giggles over the reception you geniuses have given our new columnist, Chloe Stevenson. We can’t stop doing all around hi-fives for coming up with the idea of appointing such a youngster to become our new queen-of-the-night-time-world, yet all anyone can come back with is spittle in the comments section about the use of proper grammar and how “disappointed” they are in us. Which just goes to show, Vancouver’s club/dance/party/live music scene is full of incredibly well read, word-smithing thirtysomethings. We can’t wait to see this important scene immortalized in the pages of some generation-defining novel by one of you future Chuck Klostermans.
LINK:Beat Kids: Death to Dives

Probably the only time we got out of bed before 11am all year was to wake-n-bake in our pajamas and watch Amil get on the CBC to go head to head with some old bat over that slut Oprah Winfrey’s book The Secret. The weirdest thing, though, was seeing Amil on TV looking all official with the moniker “Amil Niazi – Only Magazine” at the bottom of the screen, like we were a “real” publication. Which seemed a bit odd for a bunch of stoners in their underwear. LINK: Oprah’s Real Secret

Poor David Look graciously extended his palette to some of the most sour and secretly coveted eats this side of the Church’s Chicken (Hastings location, natch). The untold story? Since starting the experiment Mr. Look’s caught food poisoning, traveler’s diarrhea, a quirky little case of flesh eating disease on the mouth and got stabbed three times on three separate occasions. On the flip side though, he did get all $60 of his library fees excused after penning a nice little review of his lunch at the Carnegie Public Library. To date, that is literally the most money anybody has ever made by working for Only Magazine.
LINK:The Carnegie Public Library

Sean Condon is an asshole. While almost all of us try as hard as we possibly can to steer this magazine into a steel-enforced brick wall at full speed, he insists on reporting actual news, over and over again. News! Boring, useless news. What the fuck do you expect us to do with that? At least he uses language we can understand like “pee-hole” and “dirty sanchez” and whatnot. Otherwise it would just all be blah blah evictions blah blah Olympics blah blah homeless blah. And honestly, we saw enough of that shit outside the Balmoral on New Year’s to last us a lifetime. The last thing we need to do is waste our time reading about it.
LINK:Evictions at the Dominion

Meg and Jeph. The best thing about having a married couple writing for us is that they can do half the work of one writer, each. While the “interviewing each other” technique was a fresh way to review music, they took a little bit of heat for their review of the latest Ween album. It’s probably our own fault. We forgot to tell them when they started, “You can write anything you want. Anything. Just don’t mess with Ween.” That’s like pulling on the tassel that hangs from a Shriner’s fez hat. You don’t mess with a Shriner’s tassel. When you do, you’re asking for trouble.
LINK:Discotext

Cameron Reed acted a bit too much like a real journalist and actually made a couple of phone calls for his piece on how the major news media like The Province are presenting Facebook as a “legitimate” source of information. Such an intelligent and intrepid examination understandably led to a bit of virtual necking, but he eventually ended up denying their friendship request. However, we did learn that The Province is married, plays (and sucks at) Scrabulous, is a member of the group “1,000,000 Strong for Bruce Allen” and might be attending Steve’s B-Day Party on Thursday.
LINK:Livejournal-ism

We actually made calling bullshit on The Province into a bit of a habit during 2007, which, to be fair, is easy. Where we were most successful is when we called shenanigans on their entirely useless six-part-series on youth gangs in tittle old British Columbia. They were so threatened by our journalistic one-upping that they actually published a response defending themselves! That made us feel all David vs. Goliathish for a few weeks, and also initiated our love affair with the StatsCan website. There is no better way to make friends than with statistics.
LINK:CALL
LINK:RESPONSE

And finally, for those of you who kept careful score through the entire year, the final, annual tally for Credit Check was an astounding -174. Nice work, God.