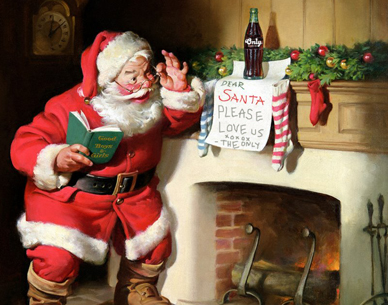 To properly celebrate the birth of Jesus, we’re taking a short vacation. Mostly, this break will be used as an opportunity for us all to debauch guiltlessly while simultaneously cleansing our souls of the mess that was 2007. Don’t worry though, the break will be short and largely go unnoticed. Just like Napoleon, but sort of the opposite. Just remember, we can put our arms back on but you can’t, so play safe. See you when we sober up.

Adam: I’ll be getting fatter on eggnog and growing my hair even longer. I also think that turtle necks and blazers are gonna make a serious comeback. Look for me in 2008. I’ll be the fat, long haired guy who looks like I used to own a yacht, but who lost it all in a back alley game of Durak. No deck shoes though. That’s taking the look just a little too far.

Alan: I am flying to Edmonton for a 48 hour family Christmas holiday at a cost only slightly more than a spayed and vaccinated pot-bellied pig. Maybe if you took the pig to a movie and Joe Forte’s for dinner, that’s airfare these days. Over the next two weeks I’m working on finishing illustrating a kids book for adults I’ve written about a balloon-animal artist living in KrÃ¼mblburgh (Prague/Edinburgh/London/Naples) where everybody hates her except her cat, Laurel. Oh, and I’ll be drinking over the next two weeks, too.

Amil: I’m adopting a Mexican kid. But just for the Holidays, then it has to go back.

Brynna: My parents don’t love me enough to buy me expensive presents this year, and I even have to pay for my own booze and drugs. In light of this total gyp, I’m spending the rest of December alone playing with all my toys from Christmases past that aren’t broken. Yesterday I took pictures of my Tickle-Me-Elmo with my 2.1 megapixel digital camera, and later I’ll see if my X-box 360 is still in commission, since I threw my Nintendo Wii at a wall in my last drunken rage (Saturday). I’ll then lock myself in my room and open and close a musical pop-up card while chasing the dragon. Being an upper-middle class suburbanite is so overrated.

Chloe: I’ll have you all know that I do not celebrate Christmas. More importantly, I celebrate New Years. I will be hosting an event in the Canary Islands, being drenched in Paris Hilton’s canned champagne and covered in diamonds. After which I will return to my stoop as party girl of the century (to be read while listening to Britney Spears’s – Piece of Me).

David: I’ve been gleefully putting the finishing touches on my stalking station in the shrubbery that surrounds the residence of Alana Black. I will be moving there for the holidays. It’s complete with canned goods, a padded seat for my ass, an empty bleach jug that I can piss into, a small canopy for inclement weather, binoculars, a 1.5 litre bottle of gin and a camera to record the most memorable events of HER EVERY MOVE! ALANA. I LUV YOU. MERRY XMAS! XOXOXOX

Logan: Instead of going to the Pyramids like I did last year I’ll stay in and watch Gumby a few more times and listen to rave music. I’ll probably eat some LSD or condiments from my fridge with rice and mustard and put off bathing again. I’ve been drawing maps of places that are real in my head. There’s even a town called Hanson, can you believe that?! They have 2 schools, a dust factory and a double helix highway. The rest is a secret. Christmas is so silly! Hey kids, according to NASA the Sun’s magnetic field has flipped. That means the north pole is now the south pole. Old news I know.

Meg and Jeph: We will be doing the same thing that we do every week. We will spend a full 168 hours listening to four new albums and then writing the best reviews imaginable. But for the period of Christmas no one will publish them for two weeks, so it will all be in vain and at the cost of you, the reader.