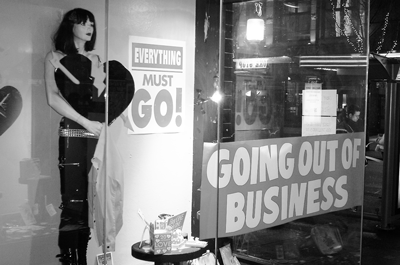 Hands Off, You Damn Dirty Apes

Autocracy is absolute rule by one despot. Theocracy is rule by a religious elite. Teocallicracy is defined as being ruled over by Mexican pyramid temples. Vancouver, it would seem, is under a Simianacracy- government by monkeys.

As part of funding the new RAV line intended for ferrying in Vancouver General Hospital workers from the suburbs and getting North Vancouverites quickly out to Richmond and the airport, many businesses along Granville are going to be charged an additional 30 per cent rent. Yep. Nearly one-third of their rent will be bumped to help pay for all those tourists expected to hop on the skytrain and be taken out to…not-Granville Street. And, of course, to cover the massive costs of transporting potential millions of suburbanites who don’t need to come in to Vancouver to buy what they’re needing. Of course, those businesses which can’t make the hike, such as Cheap Thrills, The Leather Ranch, and ModRobes, which are closing as a result, or have already pulled midnight runs, these can always be replaced by Robson Street-style high-end dumps. They haven’t decided yet whether they are coming or going, but Granville Book Company may disappear soon, too – or perhaps simply move. Their loyal clientele might follow, but anything is risky in today’s quirky market.

So, bye bye north Granville. Gradually all the interesting places which have miraculously survived along the premiere strip in Vancouver will be hedged out to make room for… all the same places that are already on Robson, plus a bunch you normally only see in malls. Maybe Past Times will take over one of the cinemas.

“How do the monkeys make such important decisions?” we hear you ask. Here’s the scoop, people, straight from Only’s hidden microphone at the secret Masonic 54 Degree Orangutang Shill and Boners Society who hammered out this highly beneficial business plan.

MONKEY B: Ooh ooh ohh awk! AWK! [Proceeds to groom Monkey A, picking out fleas and maggots and eating them, a clear act of back-scratching purposed to obtain the contracts for supplying raw concrete and laying cyber-optics cabling.]

MONKEY D: Auuuuuuuugh! Ook ook, eek…? [“I object; does the member have a viable business strategy for obtaining grade A concrete, or will he use banana peels and his own turds again, as he did for the ill-fated condominium complexes on Granville Island in the 1990’s?”]

MONKEY A: Huh. [Kills Monkey D, tearing furry flesh off the highly respected financier and former city councilor. Smearing steaming blood across its rage-stricken face and presenting aggressively its inflamed, purpled ass in the faces of the other businessmonkeys, Monkey A quickly and diplomatically curtails divisive opinion and returns the meeting to order. To Monkey E, it asks:] Babblballbababbb?

MONKEY E: [Nodding and taking its cue from A, E reads back from the recent minutes] Shriek! Shrieeek! Ooh ooh ohh awk! AWK! Auuuuuuugh! Ook ook eek…? Huh. [Mimes disembowelment but tactfully refrains from shoving its ass in members’ faces lest it step over its place in the jungle order.]

MONKEY A: Scream gabble gabble howl shriek. [“Excellent. I suggest we conclude our meeting with a brief, empowering, circle-jerk session, then go catch a cocktail at Doolins or The Penthouse Gentlemen’s Club? Agreed? Meeting adjourned. Will somebody bring D’s corpse so I can rub his intestines on my belly? Plus, I can wear his flesh. With Leather Ranch gone I need to get me a new Spring jacket from somewhere.”]

There you have it. The inner mechanisms of Vancouver’s business planning community. You, of course, have no say in this matter. What would you do, anyway? Complain? Make your voice heard? Throw rocks at the trees? Huh. Don’t make me bare my ass at you. However, come the coming election, show your ass to Gordon Campbell and at any civic meeting regarding RAV from now until voting day. You are the silverback here. This is your jungle.