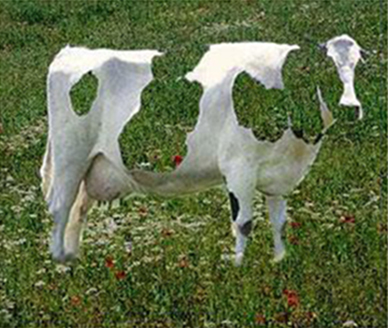 “Time,” said Mr. Dreever, “is not an illusion, because illusions are as solid as this table, therefore time is no more intangible than thought. It is thought which is an illusion.”

Mr. Dreever was my high school art teacher. He had a porcine face, the features set in a permanent expression of piggy amusement towards the world, but with eyes lit by an internal bonfire of crackling delight and roaring madness.

“In fact,” said Mr. Dreever, inhaling deeply to stoke the furnace, “I shall prove Time is material by living all of next week three days in the future!”

Not a single word Dale Dreever said ever made sense, and he stocked his classroom shelves with bleached cow skulls and 1950s kitchen appliances to which he’d assigned names, personalities, love interests and occasionally soap-operatic, gÃ¶tterdÃ¤mmerungian conflicts. There was a whole churning mythology invested in these skulls and toasters that he somehow kept continual track of, so you could ask at any time how RagnarÃ¶k was progressing and without skipping a beat he could respond, “Mitsy the Blender has taken the Ice Cream Bridge at SnÃ¸er-SnÃ¸er, but Barqnor the Bony is only a day’s grazing from the Field of Cactus Cheese.” If one felt inclined to check in the next day, Dale would pick up wherever he had left off, continuing until you’d groped blindly the doorknob behind you and escaped.

Dreever was trying to get kids growing up in Edmonton to think beyond who’s older brother was buying them vodka this Friday, and whose mother’s kitchen floor they were going to puke it on. We were sort of friends. The only thing that unnerved me was his fish.

Every year Dale cleaned out the huge fish tank at the front of the classroom, filling it with fresh water and fish. For their first assignment students would then make “Feelies”, hollow globes of clay decorated with marks or added bits of clay and fired in the kiln. Feelies unclaimed after grading he’d put in his fish tank. The noxious gases still contained in the clay would bubble out and kill the fish. At the start of each subsequent class Dreever would chitchat with the dead fish and sprinkle food over their floating, bloated, rotting corpses until by the end of the year the tank was stiff with noxious grey/green putrescence.

The fish unnerved me because, like the cow skulls and appliances, he named them, and no matter how unrecognisable as fish they became, he always knew which he was talking while they “gossiped” about who was sleeping with the bubbly scuba diver lately and who had their crooked fin in the ol’ treasure chest.

Mr. Dreever was less scary than Mrs. Bell, who taught English. Her husband was a magician and she had obviously dipped into the darker tomes in his library.

“Karl,” she said one day. She’d been writing passive past perfect tenses on the chalkboard when she suddenly turned round and in an inhuman voice summoned Karl’s attention back from the girl he was trying to seduce.

“Look inside your desk, Karl. There is a folded piece of paper there. Unfold it. What does it say?”

In a voice rich with nausea Karl croaked,

“Thank you, Karl,” said Mrs. Bell, and resumed scrawling what appeared to be Norse runes on the board to explain the phrase: “I had heard the music/the music had been heard by me”.

Karl failed to score with the girl. His balls had crawled inside him up to his neck.

The day after Dreever claimed he was going to live the week three days in the future I went up to him at the start of class and asked if I could have an extension on my perspective studies.

“I don’t know,” replied Mr. Dreever, “but I guess he shouldn’t have left his shoes in the hall.”

“I don’t really follow hockey— that’s the one with the puck, isn’t it? I think I heard it was the New York Rangers.”

OK,” I said, and backed slowly towards the door, reaching awkwardly for the doorknob.

For the next few days Dreever was more incomprehensible than ever. Those who considered art something to sleep through stopped coming altogether. Dreever noticed the diminishing number of bodies in his class, but whereas once he would smoulder powerlessly over their lack of imagination, now he just seemed sad. Resigned. I, on the other hand, who never gave a shit what anybody did with their time (I skipped most of French to hang out in pool halls and bars willing to risk serving underage patrons) became increasingly angry at the deserters. Mostly, I was angry at Dreever for his bloody-minded brainfuck scheme that gave these folks an excuse not to turn up.

One day one of the last meatheads left was screaming for blood. He was a jock who hated showering and whose shoes (amongst other items) therefore always stank. He’d leave his sneakers outside classrooms for airing, but today somebody had put hair gel in them. The next day the NY Rangers won a big game against the Oilers. Somehow, through a combination of observation, creepiness and sheer, blind luck, the gibberish Dale had been spouting was coming true! He was making the future! Well, maybe not, but he did guess the outcome of the hockey.

At the end of the week I was sitting by my locker avoiding math.

“On winning the school’s art award! You’re going to art college next year, aren’t you? This should help. It comes with a cheque for $100.00!”

He handed me the little plaque and a cheque made out in my name.

“Mr. Dreever, we’re only halfway through the year.”

“Not in the future,” he said, and wandered off, humming some bovine opera along the lines of Wagner but made of moos.

Not long after came news that the school was shutting down half its art programme, ostensibly because not enough students were registered for it, but other creative electives were clipped as well. The electronic music programme saw all its instruments sold to buy basketballs and shorts for the various school teams. Strathcona Composite had won more art competitions over the years than any other school, and far more than its sports awards. However, the school had a full-sized pool, the best track and field facilities in the city, and two gyms. Corporate sponsorship, only just rearing its head in the secondary educational system, was just too alluring for the board of directors, and football is a bigger draw than Feelies..

Dale had seen the future, not just of the school but of everywhere in the arts. Today, Dale Dreever is an activist in Alberta fighting for funding in arts education and a hero to invisible cows across the universe.