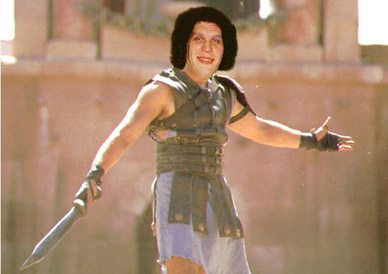 Julie was one of two lesbian drivers at the dodgy bus tour company I worked for in London. Julie and Diane adored me because they couldn’t figure me out. I chased women, but didn’t seem to mind that I never caught one, and I didn’t chase men, but didn’t seem to quite act straight – which is to say I wasn’t appalled when men flirted with me, I just found it funny.

And I tolerated, even hung out with, Archie. Which nobody could understand, because Archie was well known to be psychotic, paranoid and big enough to knock a giraffe over. Which didn’t make me gay, just inscrutable. And Julie and Diane found me more entertaining than a nunnery with an open window.

Even harder for folks to understand: I wasn’t afraid of Archie. Mostly because I’m too dumb to be afraid. I thought I was smarter than Arch, obviously smaller, faster, more nimble. Also, besides being (I thought) my friend, what was he going to do if I didn’t want to have sex with him in Turkey? Rape me? Ridiculous. I’d have him arrested. Which in Turkey is a death sentence. So, on such strengths I agreed to go on holiday with Mr. Pecs.

We almost didn’t get on the plane. After a pint at The Bag ‘O’ Nails pub, we wandered to Victoria Station, and while waiting for the train to Gatwick, we popped into the station pub for another quick pint and a half. And then another at another pub right by the tracks. Once on the train Archie summoned the roving bartender for two double gin and tonics.

“That’s a good idea,” I concurred. Archie raised his eyebrows and nodded.

At the airport we have a couple more or three, by which time I was sozzled. In the departure lounge I stumbled over to one of the airhostesses and accidentally poked her in the head.

“I really like yer hat,” I explained apologetically. Security arrived to ‘request’ we vacate Gatwick forthwith, but Archie stood his ground. Which was a lot of ground.

“Fack orf,” he suggested. “I know how it works. You puts us orf the plane you’ll have to find our luggage, and that’ll take hours, mate! You’ll never get in the air today. I DARE you to chuck us out.”

I was sober by Turkey, but after a day learning to impersonate a pickled lobster in the sun I spent a good deal of time in bed shucking skin like salami rind. Archie had his day in the heat, too, and I will never forget a field trip we made to ancient Ephesus – today called Efes – where, incidentally, the movie Spartacus was set. Arch was so toxic with booze and ultraviolet rays he became ill in the 2500 year-old Vomitorium, its first proper usage since the days of Christ. Supporting an eighth of an imperial ton of staggering Archie Pec back to the tour bus has left a permanent dip in my spine.

Christmas Eve/Morning a year later, around 2am, I had a dream. I was in bed watching a western on TV, and I sensed bodies swarming in the shadows behind me. The shapes began crawling into my bed. I was terrified. ‘Don’t worry,’ says one of them, ‘we don’t want to hurt you. We just want to watch TV!’ Then I heard somebody screaming, and I woke up to find it was me. My ceiling was caving in! A couple hundred pounds of centuries-old wood, plaster and bugs landed by my head, almost canceling Christmas. The room was blanketed in debris and scampering, Cretaceous insects. I threw on a bathrobe and ran upstairs to see what had caused this near catastrophe.

“My roof fell in!” I gasped to my neighbours above.

“Yes, yes!” the newly married couple commiserated. “This is a terrible building! Our kitchen is always drafty and the taps leak!”

“I don’t care about your taps!” I shrieked, “I ALMOST DIED!” I stormed to the place corresponding with the spot over my bed. Which turned out to be where their bed also was. Whatever those newlyweds were doing at 2am, Christmas Eve, that brought down my roof, I asked them to stop. I returned to my own flat, looking now like Pompeii after Vesuvius popped. The young lovers were too joyful at starting a life together to stop. I slept in the kitchen to survive their passion.

My landlord dismissed my decision to not pay rent until everything was fixed.

When Archie heard of my misfortune he offered to let me the spare room at his house. Â£200 a month, plus chipping in for groceries, but no bills or bond. In London that’s like God coming down and giving free foot massages.

I was now living in Bermondsey in South London. A stone’s throw from the Underground Station where I was currently working, having quit the dodgy bus tour company. Archie and I often went to The Clarissa, a local pub. In Bermondsey it has been a tradition for generations for pubs to put out free seafood nibbles on Fridays. And not just a bowl of capers, either. Cockles! Whelks! Shrimp! Eels! Whole smoked or steamed salmon or mackerel! An incredible smorgasbord-de-la-mer, gratis. Brilliant!

One afternoon I was drinking with the regulars. Ronnie was nearly ninety and hadn’t a tooth in his head. A jolly old raisin, he was swapping me stories for pints about how the streets used to be made of tarred wooden blocks and every winter as a child he would steal whole sections of road for heat and his ma to cook over.

Turns out my new friend was an infamous cop-killer during the fifties. You had a problem with the law, or at least any honest, unconnected bobby, and Ronnie was the guy who sorted out your wrinkles.

NEXT WEEK! Canada Day in Hell! Archie threatens to tuck me in with a meat knife! I’m saved by the IRA and possibly condemn a supergrass to a long holiday under the Thames!