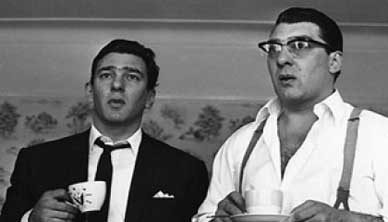 This is the story of how I lost my gung-ho being threatened at knifepoint with rape by the drunken scion of an English mafia baron but was rescued by the IRA. Only the names have been changed to protect me from the guilty.

People often think my stories are made up. However, I learned a long time ago that adventures are like puppies. All you need do to invite them into your lap is open your eyes, give a big smile and say “C’mere boy!” I believe all a person truly has in this life are the adventures they make for themselves. I’ve always jumped first and thought later, enjoying in the meanwhile a leisurely gander at the ocean crashing against the cliff I’ve leaped off. It isn’t confidence or bravery, however, which lent me such grace and pluck. I was just too dumb to worry.

I learned to worry the night Archie Pecs stood swaying in my bedroom doorway, flashing a meat carving knife.

I met Archie while living in England working for a dodgy bus tour company. If you’ve been to London you’ve noticed these charming rogues, probably when they grabbed you by the neck, emptied your wallet and threw you on a double-decker bus to see the sights of Jolly Olde London Towne. To be fair, the tour itself actually was brilliant, with funny, knowledgeable guides and including a boat cruise down the Thames, but those ‘selling’ the tickets, the touts – well, even we referred to ourselves as ‘street scum’. I was a professional liar, thief and conman, out to cheat tourists of every tuppence remaining after the rest of London ripped off their ‘sausage and mash’. There were three bus tour companies operating like rival gangs, of which we were the largest and most ruthless. In daily pep-talk sessions we were exhorted to regard the other touts as subhumans, as Nazis, to be hated and killed if necessary. Fistfights and worse were common. Frankly, I liked my opposition better than most folks in my own gang.

My milieu, then, was the realm of Lock, Stock and Two Smoking Barrels. In this environment Archie flourished.

Archibald Pecs was a gorilla. Bald and mountainous, I had personally seen him pick a man up by his neck with one hand. Born into one of the most notorious crime families of ’60s London, the Donaldsons, violence and fear were like salt and pepper on the dinner table. Back then the kingpins of the underworld were the Kray Gang, lead by twin brothers Reginald and the psychotic, homosexual Ronnie Kray. The Donaldsons were their biggest, most ferocious competitors. Archie was also gay, which meant, in the overwhelmingly homophobic Cockney world (and in Britain in general at that time it was illegal to be queer) he had to be twice as tough and ruthless as anybody else. Don’t misunderstand me, Archie’s gayness was secondary or even tertiary to his sexuality. What turned him on was domination. Archie was flamboyant, as camp as a jamboree, but his gayness was merely the rainbow-coloured human suit he wore as a disguise in the world. If he’d been straight it would have been incidentally women that he preyed upon.

In the Bag O Nails pub, immediately next door to Buckingham Palace, he once told this story to myself and a few of the guides:

“There was these two punks in a pub, right? Wondering how they could make a few bob and they sees this famous villain of the day holding court with his lackeys. ‘I know,’ says one punk, ‘Arch Pecs lives round the corner owes this villain a monkey (Â£500). We beats the milk and honey out of Arch, takes it to the villain and get in his Good Book. Easy peasy.’

“Now, back then, everybody knew everybody, where they lived and what they was up to. So they comes to my house – I was about 15 – and started kicking the Eartha Kitt outta me. Me ol’ mum, Rosanne, comes roaring outta the kitchen with a broom stick to knock their knackers off, so they starts pummeling her. ‘Archie!’ she shouts between punches, ‘get to the Red Lion, fetch the boys!’ So I scarpers all the way to the Lion – ‘Kin ‘ell I was fit back then! – to let the family know what’s happening and they swarm round with cricket bats and bits of plumbing.

“The punks is gone, so mum’s carried to the ‘family’ doctor and the boys sit down for a natter.

“Now, everybody knows everybody, where they live and what they’re up to. They know these two arseholes, they knows one of them just got married and has a baby. So they goes to his house and they chops up the baby.”

As Archie said this everybody gasped. We stared in shock, unable to determine if he was having us on. The idea of thugs chopping up an infant as some kind of local justice was horrifying, yet Archie continued drinking his beer as though this was merely a pit-stop on the way to a more amusing story. He stopped drinking and looked around the table.

Perhaps the story was a lie, a wind-up to shock even hardened tour bus operators. Certainly, however, from books I’ve read about gangland London and the monsters that inhabited it the story is anything but far fetched. I’ve Googled Archie’s family history and found his mother was indeed Rosanne Donaldson, daughter of that notorious family’s patriarch. Regardless, the story indicates Archie felt comfortable dismissing infanticidal butchery as something not to get worked up about. At a bare minimum the incident suggests Archibald Pecs was somebody any sensible person would stay the hell away from.

NEXT WEEK: I go on holiday to Turkey with Archie Pecs! I buy drinks for a retired cop-killer! My house caves in on me and I decide to rent a room in Archie’s house!