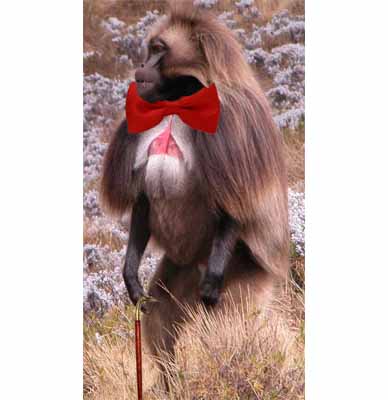 From the shadowy depths of the parlour squeaks an ancient wheelchair. It creeps, shrieking with rust, into the choppy light of the dying candelabra. The twisted corpse occupying the chair inhales with a rustling sound like dried leaves, then whispers,

A hairless baboon, stricken with eczema, dried semen thick as pie crust on its hands and crotch, breathing halitosis so toxic it hangs garlands of greenish gas upon the air, drags a club foot along the length of the oak table to its master.

Massive double doors at the far end of the room crash open with a sonorous boom. In sweeps a pudgy man with electric blue eyes wearing a black cape.

“Sorry I’m late,” he says. “There was an accident on the freeway and I had to stop and see if there were any ‘pickings.’ Have you eaten already?

“Moochie is fetching some eyes.”

“Good! Moochie, broil me a few of those marinated children’s hearts you do. Damn, I love that sauce. You’re an ugly bastard but a genius in the kitchen, I’ll give you that.”

Moochie the baboon bows as best his hunched back will allow, his ass flushed magenta with gratification. He limps through the pair of swinging doors leading to the kitchen. There shortly follows the thudding of a butcher’s knife and the absent whistling of a journeyman chef going about his business.

The blue-eyed man takes a seat near the corpse and puts his feet on the table, ignoring the dirty looks from the empty eye sockets of his host.

“Late as ever. Even compared to you.”

“Well, chances are he caused that accident on the freeway, the drunken blockhead, and needs to bribe his way out of it with the police. Shall we start without him?”

“Very well. I shall begin,” wheezes the moldering sack of flesh-jerky, biscuit-dry bones and maggots. “The 2010 Olympics are coming along perfectly. Another 20 million dollars has been siphoned from the public coffers to pay further ‘unexpected costs’. The general attitude towards the cuddly mascots we commissioned several stunted chimpanzees to design is one of overwhelming disgust. And the recent furor over Taser-related deaths has led nowhere. Ah, thank you Moochie, my eyes…”

The baboon deposits a greasy paper bag full of the gelatinous snacks in the corpse’s lap. The bag gives a sense of being at a baseball game eating peanuts, or wandering Victorian London nibbling hot chestnuts from a Cockney street vendor. The corpse is a romantic at heart. One after another Moochie stuffs eyeballs into his master’s face and works the jawbone by hand.

“Moochie!” the dead thing hisses angrily. “You know I prefer salted eyes! Take these away and season them properly!”

As the chastised ape hastens back to the kitchen, instinctively ducking the corpse’s fatal Stink-Eye Squint Curse, the enormous bas-relief bronze doors of the parlour yawn.

“I’m late,” acknowledges the sodden reptile. “I hit a Winnebago and had to eat the family so there’d be no witnesses. I can’t get another DUI or I’ll lose my license…”

“Think nothing of it!” chirps the blue-eyed man accepting a steaming bowl of grilled hearts from the monkey. “We’d only just started. Care to make a progress report?”

“Well,” belches lizard man, grabbing a glass and the entire bottle of Chateau de la Merde sparkling gasoline from Moochie’s silver tray, “I haven’t managed much since I shut down the human rights commission and gave the forests away to the American lumber industry. (hic!) But I did pull one over on the greeny treehuggers making a deal with that robot governor down south to open a hydrogen highway stretching from the North Pole to the South. Hydrogen-fuelled cars spew a quarter of the carbon dioxide but the new freeway and marketing campaign will encourage four times the traffic, plus we can charge tolls every couple miles. (BURP!)”

“Pathetic,” sneers the corpse. “I’m turning a two thousand year old celebration of human achievement into the most blatant cash-grab in the games’s history, and the best you can do is mere half-hearted do-goodery? Sir,” smiles the corpse repulsively at his other guest, “I’m presuming you have better to offer?”

“Naturally,” smiles blue-eyes back. “Ahem. I am busily pushing this country into wars so ridiculous even vultures are embarrassed. I have derailed a Commonwealth of nations from capping industrial carbon emissions (hopefully making up for your hydrogen highway). Every day this land’s economy is pushing towards Milton Friedmanesque lunacy, despite such brutal theories having resulted everywhere in financial devastation for all but the rich. And tomorrow I begin my new health regime of eating only the freshest children, dredged in sodium and lead paint from China, then fried in prairie crude. I feel on the verge of greatness!”

With the help of Moochie wildly flailing his limp arms, the body manages to clap at least once every four swings.

“With luck and public apathy we’ll reduce Canada to a socio-economic moonscape in a few years,” grins the corpse. “Then we’ll be ‘forced’ to declare a state of emergency and apply ‘shock doctrine’ policies as our brethren did in South America, Russia, Poland, China and Easter Island. Excellent work, gentleman. And now, Moochie, you may serve dinner. I have a special treat for you fellas! Roast thunderbird, seabear-stuffed sasquatch, and my piece-of-resistance, jellied babies! Pour another round of Chateau de la Merde! Let’s celebrate like there’s no tomorrow!”