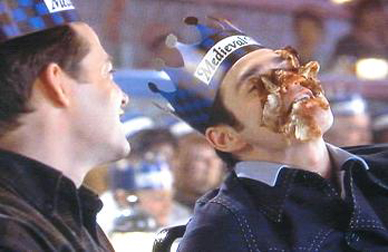 SkinEthic produces its own form of reconstructed skin, RHE, while L’OrÃ©al holds the patent to Episkin, which its scientists developed in Lyon… To make Episkin, donor keratinocyte cells, collected after breast and abdominal plastic surgery, are cultured in tiny wells of collagen gel, immersed in water, amino acids and sugars, and then air-dried for 10 days or aged to mimic mature skin by exposure to ultraviolet light….Cosmetics are tested by smothering the almost babylike skin with the cosmetic material.

Decorating your person as local society considers most alluring has been a pillar of civilisation for thousands of years, but this overwhelming obsession with appearing youthful is a relatively modern phenomena.

Now, to qualify that: The desire to appear young has being a going concern since Pleistoscenic Neanderthals invented The Friday Night Square Dance Mixer and The Diplodocus-Pie Singles Social, but it was a minority of rich indulgers. Cleopatra bathed in ass milk, but the common Egyptian was just trying to figure out how you milk an ass so they’d have something to put in their tea. Most folks were more concerned about being eaten by tigers than fretting about looking tasty enough to eat.

Men around the world, as well, are increasingly looking to the knife to keep their edge, as well as the paint pot.

Global sales of cosmetics is expected to top $300B by 2010, but by 2009, only companies which no longer test their products on animals will be legally allowed to sell in Europe, the largest market in the world. The race is on to invent animals nobody cares about in order to have living canvases to shellac with Tahitian Sunset eyeshadow and Liqui-Face!â„¢ head-balm.

Or, more correctly, the race is on to invent the skin of an animal nobody cares about, since few people are yet so manical in their pursuit of faux-immortality to care how svelte and fresh-looking their spleen or gall bladder is. Never mind their lungs or heart. Though it could happen. There may come a day when trendy consumers want their internal organs to look good on x-rays, regardless of how much tar they’ve inhaled or cheeseburgers ingested.

Nowadays EVERYbody wants to retain or improve their good looks, and they’ll pay any price to do it.

And I am prepared to take their money. You aren’t happy with your skin? Then I invite you to try mine on for size.

While other kids contented themselves drying smeared glue on their hands and grossing each other out peeling the ‘skin’ off, when I was young, I took it to the next level: Actually making other kids puke by burning myself pink in the sun, then peeling my dead flesh off in strips. (When I had enough pieces I made crafts out of them, lampshades and such, the fleshy gauze handling like papier mache but more attractive to flies.)

That sort of dedication allowed me to corner the market on childish behaviour. Other tykes had to move on and ‘grow up’, wasting their time and energy growing hair, exploring genitals, developing job skills, finding love, securing spouses, producing more children and ‘living’. By the time I hit my early thirties, I owned that playground.

Remember: “You Are Only as Young as You Act”. I believe that was Socrates. Or maybe Ashley Simpson, I get the two mixed up.

My business plan is simple.

When sun is available, I will slather my body with a 50/50 mix of moisturising lotion and olive oil–otherwise known as Pam–and stretch myself out on a giant sheet of aluminum foil to nap. After baking myself until indistinguishable from lobsters, I’ll go somewhere cool to recuperate and avoid butter. Delicately unraveling the gossamer strips from my arms, back and face, I can courier these Swiss rolls of eternal beauty anywhere my customers require stopgap patchwork done on their crumbling mugs.

I will even pre-apply whatever traditional cosmetic patrons desire. Lippy, rouge–I understand there’s fellas out there airbrush-stenciling designer stubble on their rough-hewn lantern-jaws. I can do it all, then rip it off and mail it to your home, COD. All I ask is a little trust and a working credit card.

In the winter, autumn, spring, or what passed in Vancouver this year for summer, I’ll bribe suntan parlour attendants to repeatedly roast and shuck me like a marshmallow.

Once my peeling technique is perfected I’ll take the time to develop my piece-of-resistance: slipping the outer layer off my entire head. I’ll market the stretchy tube as the ultimate cosmetic convenience. Rather than spend hours in front of a mirror, women and men will be able to pull on the ‘Face Sock’Â®Â©â„¢ secure it with scotch tape at the neck, and spend the night on the town. And in the morning, keep the fleshy ski-mask on and go hit the slopes of Whistler.

When you get bored of wearing me on your face, don’t forget, I’m edible. This stuff is basically the same as prosciutto. Wrap asparagus spears in about fifteen or twenty layers and bake for ten minutes, serve with a wedge of lemon and smelling salts. Mmm! Zesty! Hey, if your friends like weenies breaded in pork-scratchings and fried in Nivea cold cream they’ll love these! Alternately, try frying it like very thin bacon and have it with your eggs for breakfast. Remembering, of course, to first wipe off the rouge, eye shadow, lipstick and mascara. The last thing you want, Saturday morning having a greasy fry-up to sort out your hangover, is to look down and see Anna Nicole Smith’s face on your plate.

All of this, to some, may seem distasteful. But I’ve watched a couple of these extreme makeover shows. I don’t think I’m so far off the zeitgeist, nor the barometer of seemliness. Someday, ladies and gentlemen, hunkering in front of your mirror putting on your face, you might actually be putting on mine. Your money will ensure it has a smile on it.