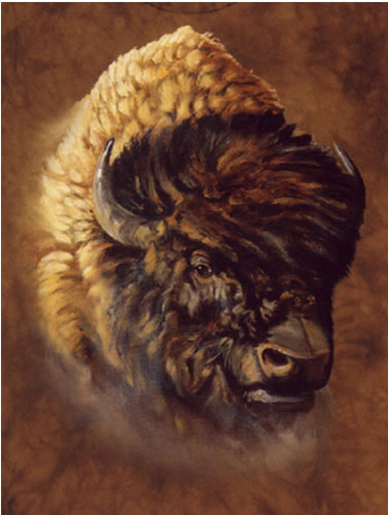 Cub Scout camp was always a drag. Oh, there was canoeing, and catching wasps with toothpaste and daring other boys to eat them. There was throwing batteries into the campfire to climax a ghost story with blue-green explosions of chemicals and flames. But there were also educational, character-building Life Experiences inflicted upon us.

I avoided Baloo’s and Bagheera’s efforts to make a man of me by hanging out with the buffalo.

Next to the camp lay an open field where grazed a herd of domesticated bison, each about six feet tall, nine feet long and weighing a tonne. I was three feet tall (until the age of 30), built like a meerkat with love-handles.

Despite their having an entire field as a buffet, I was dumb enough to assume they might be scrounging. I approached the biggest one clutching a generous fistful of grass.

“Are you hungry, big guy?” I simpered. “Would you like some yummy, delicious, uh…”

The bull stopped chewing and stared at the stupidest thing on earth, debating which of his massive horns to put through my eye. Eventually, belatedly, recognising danger, I gingerly deposited the offering (“I’ll leave it here in case you want it later…”) and backed slowly away.

Years later, telling this story to my friend Shirley Bear – a Maliseet native from the Tobique tribe in New Brunswick – she laughed.

“When an animal could – and probably should! – kill you, but doesn’t,” she chuckled in her slow, lilting accent, “it is giving you its animal spirit.”

I told her how my grandfather once told me he was one quarter Sitsika Blackfoot, making me one sixteenth. This, Shirley informed me, was enough to qualify for a Dances With Wolves-style name, a title earned in life by which I would forever be known.

“I hereby call you,” intoned Shirley, “‘Dumber Than Buffalo.’”

I couldn’t tell if she was joking, so I told another story.

At Skeleton Lake in Alberta, my Aunt Madge had parked a dilapidated caravan/trailer. By ‘parked’ I mean the wheels had long ago dissolved or been stolen. Probably by my cousins.
Summer ‘vacation’ consisted of my mother’s entire Scots/Irish diaspora family, as many as 20 of us, shoving off to Aunt Madge’s on the spur and spending two weeks fighting for a bed. Some ended up on the beach. I usually got the bathtub because the taps only ran hot and cold spiders. Nobody else wanted it, and I could sleep in peace. Except, of course, for all the spiders wandering up my nose.

Dotted around the lake were outhouses. Some were largerÂ­, better constructed ‘crapthedrals’ (or so we called them), with two holes placed side by side in one space where strangers could meet and discuss their similar circumstances.

One day I was about eight, and having an emergency. I was squeezing my legs so tightly to keep it in I ran by swiveling my ankles. I ran into the crapthedral, shut the door, latched it secure, flung myself upon a hole and yanked my pants down all in a single graceful movement. Sunlight creeping through cracks in the walls made me dimly aware of the other, hairier body sharing the pew.

Hunkering over the next convenience, not two feet away, snarled the biggest, meanest badger I had ever seen, with huge black claws and teeth bared in a mouth the size of an eight-year-old’s head. It was a wolverine, an animal so vicious even grizzly bears are scared.

Fear is the greatest laxative. I shot out of the booth on a jet of shit, mincing an escape with ankles manacled by underwear, my shrieks echoing across the lake and startling a flock of ducks on the other side to take off and fly into each other.

When I told Shirley Bear this story she almost peed herself laughing.

“So you have two animal names!” she exclaimed when she caught her breath.

Dumber Than Buffalo and Shits At Wolverine are considerably less glamorous than Dances With Wolves, so I cast my lure for one more.

I grew up poor, but blew what I had on adverts at the back of comic books.

X-Ray Glasses, sea monkeys and do-it-yourself Frankenstein Monsters could all be had for a few bucks and a steady chipping away of consumer innocence. Granted, the glasses were based on advanced squinting technology, the sea monkeys were naked brine shrimp and the Frankenstein was a balloon with Boris Karloff’s mug stenciled on it. Unless you already owned helium, your creature was doomed to meet the torch-wielding villagers lying on his face.

None of these past disappointments stopped me from sending six dollars (a fortune) on a Real Nuclear Submarine with Working Periscope And Deadly Missiles.

My vessel arrived in time for summer vacation. I packed it, unassembled in its box, for Skeleton Lake. Before the car pulled to a complete stop at the shoreline I leaped out and started inserting Tab As into Slot Bs.

Once shipshape and seaworthy, I clambered in and launched. I paddled furiously towards the centre of the lake, steadily submerging.

First I tried the periscope (cardboard tube with shiny silver stickers for mirrors) to find some enemies, but there was too much water pouring in for me to see, so I fired torpedoes (toilet paper roll tubes) at random. However, the brackish lake gushing in through the torpedo bay hatches (holes) made it hard to aim. I was setting off a Sea-to-Air distress flare (tampon tube with day-glo red ribbon stapled to it) when the submarine (heavy corrugated cardboard coffin) folded in on me.

Thrashing about in a six-dollar deathtrap I managed to find my feet. I stood up, finding myself chest-deep, about ten feet from shore. Too angry to care about being alive I marched into the trailer to sleep with the spiders, and spent every evening after everybody had gone to bed throw flashlight batteries in the dying campfire to blow the stupid world up .

“So, Shirley,” I asked hopefully, “is that worth another Indian name?”

“Yes,” said Shirley, staring at me with distress. “Should Never Leave House.”