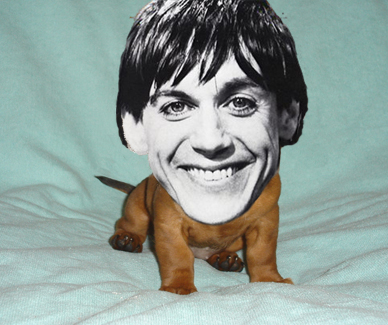 IGGY AND ELLEN 4 EVER

This week talk show host/comedian Ellen Degeneres broke down in tears on her television show while telling the heartbreaking story of Iggy The Dog. Ellen, who loves to adopt animals and keep them somewhere, spent $3,000 to have the dog’s balls clipped off and to have a professional dog-sleeper stay and sleep with Iggy so it could get used to normal life outside the pound. Eventually he was forced to give cute little Iggy to her hairdresser’s kids since he didn’t get along with her cat. The animal shelter, however, claimed that if Degeneres was not going to keep the dog, it had to be returned to the shelter. The people from the pound took back the dog, breaking the children’s, and Ellen’s, hearts.

The transcript of the segment is posted on Ellen’s website. Following it is 16,011 comments (at press time) from about three people. “Susan” writes ‘How about “Drowning out Donna is a lunatic”.’ Around 5,000 times or so. Some anonymous person responds, saying everybody should stop posting on the site until the ‘lewzer spam’r trol’ stops her crazy posting. This is posted 5000+ times as well. A third party, in an attempt to bring some real meat to a heated discussion, proceeds to write out the Constitution of the United States a further 5000 times, because it’s “true.”

Meanwhile, the animal shelter people are receiving death threats. The story is being covered by every major news network, both terrestrial and cable. Inches, feet and miles of column space is being devoted in newspapers across the continent to this incredible story of a dog. Radio talk show hosts, bloggers and political activists, not to mention lobbyists in Washington and numerous members of both political parties, are engaging in screaming matches over the subject. Protesters in every city in America, from both sides of the argument, are currently facing each other over busy roads waving placards, half of them reading. “KILL THE DOG HATERS!” The other half, on the other side of the road, say “KILL THE DOG HATERS!”

In Europe, the capital cities are burning. A rumour started that the French prefer cats and the Swiss – a normally docile people much given to collecting small pats of butter wrapped in paper depicting scenes of the countryside whenever they order bread rolls – rose up en masse and murdered millions of their Gallic neighbours. The whole of Germany has declared it simply will not leave the house until this whole Iggy affair is sorted out.

Africa is in under considerable duress. As the birthplace of all miniature terriers they feel especially responsible for Iggy’s predicament. If Africa had not been the cradle of life a billion years ago, perhaps Iggy would have never existed and wouldn’t feel so miserable today. Instead the poor animal, through no fault of its own, has caused terrible suffering to be inflicted upon the staff of an animal shelter for doing nothing more than tearing a puppy from the arms of a shrieking girl. We all know it’s not Iggy’s fault. It’s Africa’s. An entire continent is joining together, despite being ravaged by disease, war and poverty, to pledge their determination to kill all dog haters.

Billions of people are parading through the streets of India, China, the Middle East and the Vatican, chanting and demanding justice. Those too young, old, sickly or short are helping by jabbing knives and farming implements into the ground in an effort to saw off large pieces of their respective countries and send huge landmasses floating out to sea. While experts are somewhat at a loss to explain how this will help, everybody is agreed that at least something positive is being done.

NASA is in discussions with the Russian, Chinese and European space agencies, as well as with Richard Branson, to come up with a means by which the moon can be blown up. Nuclear weapons from every warmongering nation are being collected. World leaders gathered together today at the UN to have a drink with the president of Iran, and in a joyous and somewhat hysterical mood, passed a motion allowing the previously vilified country to pursue nuclear ambitions so long as they agreed to help destroy Earth’s only satellite. Mahmoud Ahmadinejad was overheard to say “I only hope Iggy can forgive us for not doing this sooner. I love that little guy!”

There are dissenters, of course. A man named Carl Passekandy in Winnipeg, Manitoba declared aloud at his local Bingo that he thought a big fuss was being made over nothing. The other seniors in the room fed him to ants. His arms and legs were bound in magnetic tape from Mrs. Kathy McNally’s collection of Zamfir albums, his eyes were gouged out with watermelon-ballers and honey was poured over his body. Finally he was left in a field with a note pinned to his ear saying “Ants! Come and Git it!” The only other non-supporter on the planet was Carl’s brother Leroy, who opined that folks went a bit far gouging his sibling’s eyes out. Leroy was tied to one hundred ducks down by the pond in the park and old ladies threw bread crumbs in every direction. Leroy was torn to pieces. The pieces were then fed to the ducks.

Otherwise the campaign to make Iggy happy again goes well. With any luck the animal shelter where he is imprisoned will be demolished with bazookas and tank shells and the darling doggy can be rescued and returned to the family Ellen Degeneres gave him to. If this can be done before next weekend, her hair stylist should be able to make an appointment to give her a trim, and maybe some highlights before she starts taping the next week’s shows. The alternative is just too awful to contemplate.