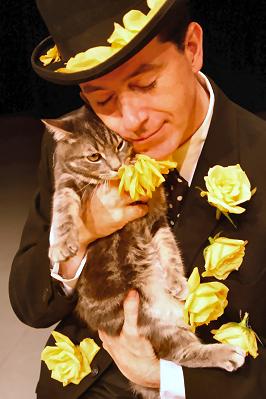 I Am America (And So Can You)

My only beef with Stephen Colbert is he churns out quality jokes at such a relentless, furious pace that soon there will be no more jokes left to create. In the same way that before television was invented there was nothing left in the world to invent, three more years of The Colbert Report will ensure every joke that can ever be will have been made already.

Even worse for myself, as Science Editor for Only Magazine, every night on his show it’s like he has a team of lab-coated eggheads and dedicated chimps in a sterile room redefining the physical universe just so he has fresh fodder to comment on. It leaves me nothing but second-run jokes and slightly soiled science.

If only there had been more inventions available for scientists and crackpots to come up with back in the 40s! The modern world would thus be spared the boob tube and Colbert would have to make do being a radio personality. He could still do visual gags on vaudeville, but it would slow him down a bit.

As it is, in just three years there will be nothing funny left.

Correction: In a year and a half there will be nothing funny left.

Stephen Colbert has published a book, hastening the consumption of all things hilarious, called “I Am America (And So Can You)”, which is funnier than a bull in a helium balloon shop, smashing and bellowing in a squeaky voice. Ignoring the risk of becoming the next Bill Cosby, Colbert writes about childhood, relationships, religion, employment, school, building walls around America to keep Mexicans out and the imminent threat to Stephen Colbert’s heterosexuality of baby carrots. All once-solid Cosby territory. It ends with a full transcript of Colbert’s genius, seat-of-the-pants appearance at the 2006 White House Correspondents Dinner. I know I watched it on the seat of my pants. Pants wet with laughing.

The basic shape of the book resembles the popular Colbert Report segment, “The Word”. Alongside each punchy, pithy, penetrating, pedantic, alliterative paragraph are comments from his subconscious printed in red. Like the Bible, the words in red are often the funniest. Even more so than _The Daily Show_’s book from last year “America (The Book)”, “I Am America” plays with what a book can do. The closest comparison to Colbert and Jon Stewart in print is the columns of Myles na Gopaleen (aka Flann O’Brien (aka Brian O’Nolan)) that ran in the Irish Times from 1940-66. Na Gopaleen wrote daily rants and musings that played on various levels of humour, from Rarified to Fart, including ridiculous technical illustrations of his own devising and ‘facts’ of his own revising, but he would also refer to other sections of whatever page he was printed on that day. Myles (Flann (Brian)) was known frequently to hang about the printing room where the printers printed the newspaper print, and would actually draw lines, arrows and doodles right on the metal plates connecting other stories to his own outlandish blather.

Colbert doesn’t do this. For a start, all the blather is his in the first place. But the same sense of irrepressible freedom is evident. The rampant glee bouncing about the pages of “I Am America” gives the impression Colbert (and the writers who joined in) knocked the thing out in a long, drunken weekend. Levels and layers and subtext and Rarified Farting infuse this handsome tome in something we poets call “permanence,” and we scientists of humour call “disaster.” Between this book and his still-running programme, I will soon have no material to work with and will have to resort to real journalism, writing actual, boring news. Legitimate work. And I am the laziest person I know. This bodes ill for me.

On a legal note, this book isn’t actually on sale yet. It is due to hit the shelves October 9, embargoed from sale until then. I employed the Mask Of Literary Criticism and the Crowbar of Keenness to get a hold of the book in advance. On the off chance Colbert’s lawyers read this review and try to sue me, my official position is that I love Stephen Colbert’s work so much I couldn’t help myself, and pray and plead he feels sorry enough for my impending obsolescence, and pathetic addiction to pictures of him in chunky sweaters, not to press charges.