the barclay hotel: the new bosman's 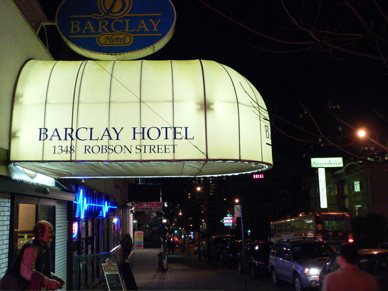 While everyone has been lamenting the impending death of the beloved Bosman’s Side Bar–one of the last sane bars in town–we’ve been busy finding a replacement. Bosman’s has been one of our favorite spots in the city for ages. As one of the last places you could openly smoke, it was like an all-night speakeasy at which you could communally break the law, and stay up late drinking quietly with your friends. But to be honest, we’d grown fed up with Bosman’s long before they announced their closure. All the popcorn you can eat doesn’t make up for steep beer prices, and the crowd had shifted from selective and stylish to jockey and lame. When smoking was finally banned, the secret society charm quickly disappeared, and we knew a replacement was needed. And holy shit did we ever find one. The Barclay Hotel (1348 Robson) is literally the new Bosman’s. In every way, it is what made Bosman’s great–and more. Let’s start with the beer prices: Each night of the week there is a pint of very drinkable beer on special for $3.50. Not “Barclay Ale” or Pacific Pilsner or something. We’re talking Honey Creams, Pale Ales, 1516 and shit like that. On Saturday and Sunday, all pints are four bucks. Instead of popcorn there are pretzels and peanuts–all you can keep down. The interior is ghastly, with decor inspired by Twin Peaks, or maybe The Sopranos if they shopped at Canadian Tire. It’s got the same basement vibe as Bosman’s, with four or five older chaps permanently attached to the bar. All it needs now is a crowd. So check out these photos, find yourselves an excuse to get hammered, and go take advantage of the last refuge of sanity on Robson. Bosman’s is dead. Long live The Barclay!