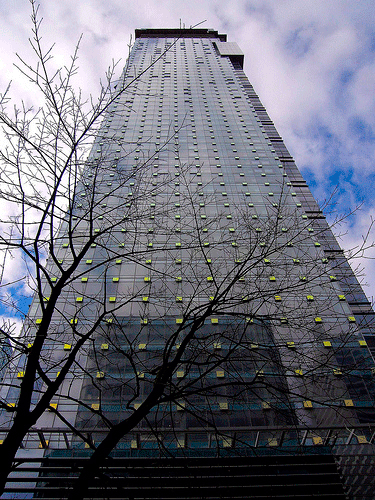 I had coffee at the Shangri-La Hotel’s Lobby Lounge last Sunday. It’s the cafe bar on the first floor just behind the hotel’s main entrance here in Vancouver. It only makes sense that I should introduce you to this place while the paint is still drying and the planters sit empty awaiting their fauna since the building itself has been towering over Only HQ for the past two years while it crawled slowly towards the sky. Since I am unwelcome at the other flagship hotel of this fine city due to past debauchery, I suspect that I’ll be filing more than one report from within the walls of the Shangri-La. We are, after all, neighbors.

I’m a total pervert. And the fact that women working in Shangri-La are forced to wear kimono-style gowns while they serve me plays into a variety of fetish scenarios that I am trying my very best to spare you. At least once, I had each member of the Lobby Lounge’s staff over to my table to answer some stupid question about the chandelier in the corner, or the blend of my coffee in the karafe only to bask in their attention. Oh, except for the one with the Australian accent which didn’t at all fit into my fantasy. I made her shine my shoes while perusing a style advice column in one of our National newspapers reporting on the acceptability of loafers without socks (yes, absolutely).

This earth-toned paradise was mine. I was the only one in the room while my kimonoed lovelies danced an attentive and submissive dance all about me. I sipped from my $6 coffee and read their free newspaper. I admired the motorized panels behind the bar that were slowly retracting to expose a variety of libations that suggested a multitude of combinations. I listened to the enchanting sounds of a rain forest work inconjunction with the thick panes of glass to block out the obscenities being mouthed by two portly workers caulking the courtyard tile just outside. Their fat asses however, were in plain view.

And it was at the site of ass in Shangri-La that paradise began to fail me. Hosts at restaurants, listen here! The biggest mistake you can make in your duties is to seat someone directly beside another occupied table when the room IS FUCKING EMPTY.

My hostess, who was later punished by having her legs removed on my orders had committed the unspeakable act of seating two women in their mid 50’s directly beside me. I was no longer in my personal garden of Eden. I was now at my Grandmother’s for tea instead of being on the verge of group sex with the bage pages of the WestEnder. They tried to out-do each other with talk of trips to Japan and the Napa valley mixed with some gossip in hushed tones so the pervert sitting beside them couldn’t hear. I sneered at their over-accessorized outfits and rolled my eyes at their matching bolero jackets with gold applique.