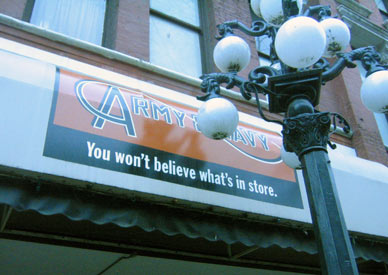 I’m wearing a suit in a discount department store with a bunch of long faced old guys lazing through ham sandwiches wrapped in plastic while I eat a hot dog. And why the fuck is there some retard sitting on the floor taking its clothes off?

It seems that more often than not, life finds me in this demographic of dining: retards and old guys. I know I should stop, I’ve certainly tried, but I have a problem. So when a source tipped me off to the $1.50 hot dog being served at the lunch counter of the Army & Navy (36 W Cordova), well, by now I am sure we all know what comes next.

Seated at a small brown table set up amongst some DVDs and a display of food processors that were on sale, I started the short, but arduous journey through the 11 inches of hot dog that I self dressed from a bucket of mustard and relish packets on the small counter that makes up the Army & Navy restaurant.

I was wearing a suit because I had snuck away from the office to imbibe in an endless chain of $1.50 hot dogs at the Army & Navy. I’d been warned about my long lunches before. Surely, by now, my colleagues must be aware of my penchant for dirty dining. But all seemed well enough as I was waiting for the elevator and the receptionists teasingly inquired about who I was spending such long lunches with.

Good lord, if they only knew the reality of the situation.

“Hey, you want to hear a joke?” before I could send an answer back across the salt covered table, I was getting the punchline from a guy with insanely white hair that ran bald through the center of his head, wearing an ill-fitting acrylic sweater that exposed his enormous gut. “Politicians spend 10% of their time running for office, and the other 90% running for cover.”

I decided to get up for some dessert. The Army & Navy lunch counter has an ice cream machine, and for $1.25 you can get a little styrofoam cup overfilled with soft serve in chocolate, vanilla, or a twisting combination of the two. Naturally I went for the twist, and decided to get a better survey of the Army & Navy restaurant by eating it at the standing only counter that wraps around one of the large white pillars running throughout the large store.

Security is tight. Guys dressed in black circle the entire first floor at all times, keeping an eye on the dining area and the front entrance, ready to club anyone at a moment’s notice if they get out of line or take too much mustard. I was terrified to take pictures; I could barely eat my ice cream. It was kind of like eating in an asylum or prison that just so happens to sell strappy shoes for $8.99 the next aisle over.

The location of this place, mixed with the low prices of the food being offered, brings in all the weirdos (myself included) who guiltily and secretly desires this kind of shit to no end. As I sat eating my twisting ice cream with euphoric lust, a woman – lets just call her that, because it was fat, balding, completely asexual and really, I couldn’t tell – came in, sat herself on the floor, and began to make herself at home by taking off most of her clothing. She wasn’t eating. Clearly the food didn’t matter anymore, she was just sitting there, happily undressing on the floor. Normally this sort of behavior would not be able to penetrate my deteriorating culinary habits, but on this particular afternoon it was like I had awoken in a crack den on prime time television. If I continued eating hot dogs, I too would wind up half nude, asexual, and on the floor. And worse even, not eating.

Things have spiraled out of control. There would have been a time where I would have enthusiastically described to you in great detail the history of the Army & Navy, and the architecture of the building itself. With precision and excitement I would have related the wonders of the $1.50 hot dog, in several thousand words no less; the neat and tidy stacks of toothpaste for sale, the never ending chatter on the intercom, the sunny disposition of the server herself. But things have progressed to the point where it doesn’t matter any more. I don’t care, I just want my fucking hot dog. I want it cheap, salty, dirty. I’ll put the bloody mustard on myself too.

Returning to my desk a bit sweaty, cuticles stained with mustard, and reeking of onion, everything seemed just fine. Nobody knew that I had just been eating hot dogs and soft serve twist in the DVD section of a discount department store. I have a problem though.