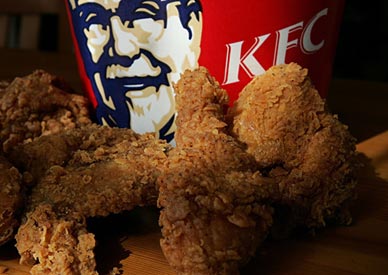 Imagine being dismembered, mixed with the various appendages of your friends, dipped in batter, deep fried, haphazardly stuffed into a cardboard tub with the words “Taste Lives Here” on the side of it, and then delivered to my door for drunken consumption. What I am describing is the ultimate symbol of negligent dining, of trash aesthetic, of ill health and disdain for longevity in life. I am talking about the bucket of chicken, and when it comes to the bucket of chicken, only one proprietor comes to mind, and that’s Kentucky Fried Chicken (various locations).

It all started with a flyer that had somehow discarded itself on my bathroom floor. All week it taunted me, whether I was on the toilet, lazing in the bath with a martini, brushing my teeth, or fighting with my contact lenses to rest upon my bloodshot eyes. Perhaps I knew exactly what was going to happen the minute I saw its bold type painted in shades of garish red and beige, advertising the “Mega Meal”. Whatever the case, a recent Wednesday found me a bit tight from a few early evening Manhattans, and it was all the impetus needed to dial up Colonal Sanders like I was returning to the dolor of an abusive lover.

Passivity and guilt was quickly replaced with desperation and urgency once I called KFC HQ to place my order, only to learn that at 9:55pm, KFC was no longer taking orders. I realized then that my entire well being hinged on holding a bucket – that I had been staring at that sumptuous trophy of golden grease all week long and had wanted its succulent juices coating my whiskered chin like I wanted an end to world famine.

In my hastened and crafty anxiety, I pulled up a list of KFC restaurants in the area on Google and called the closest one, directly, six times in a row. When someone finally answered, they tried to pawn me back off onto KFC HQ, which I explained to them was now closed and that I absolutely needed a bucket of chicken. And gravy. I wanted gravy. I am happy to report that the service at KFC is excellent, because without hesitation they complied, possibly out of fear.

With my order safely processed on credit card for $33.99, I proceeded to drink more whiskey, which is the only suitable pairing for the KFC Mega Meal. In my anticipation of breaded and battered euphoria, I imagined myself walking down the street in sweatpants with the bucket under my arm to the envy of everyone around me, while arguing loudly with my girlfriend on a cellphone. Then I envisioned myself contemplating suicide in a cheap hotel with the bucket beside me in bed, drinking mini liquor bottles from the mini bar with a package of Export A cigarettes making a regular appearance between my fingers while staring at a steady stream of hardcore porn on a swivel based television set. The scenarios I was able to dream up came fast and furious, all with the bucket as a fixture of holy debauchery.

How the overwhelmingly large bags of food arrived with several of my friends in tow remains a mystery likely attributed to the empty bottles of Canadian Club and Crown Royal I found on my kitchen counter the next day. Perhaps I had called them to witness the carnage, or to prove that, yes indeed, I had ordered the bucket. Maybe it was a cry for help. Whatever the reason, I am sure they were wildly entertained and thoroughly disgusted, but not so much so that it stopped them from photographing my drunken ass with my coveted bucket in various states of compromise. What unfolded over the span of several hours, with a refill trip to the liquor store in between, was the unassisted devouring of the KFC Mega Meal. Which consisted of seven pieces of original flavor chicken (in a bucket), a box of fries, two containers of coleslaw (which was top notch stuff), one massive tub of gravy, and a bag of those cute and tasty little brownies.

Despite attempts at separating their filthy brand image from suburban domestic violence, fat asses, and the racism of the South, Kentucky Fried Chicken still offers chicken by the bucket for those moments in life that we seem, as a society, unable to live without. Likening itself to drinking excessively, fornicating with minors, snorting drugs, and living in a trailer with three dogs, meat in a bucket fits nicely into the realm of humans behaving badly. I ate an entire seven piece Mega Meal one Wednesday night. By early morning, I was on the floor, seventy dollars in debt from whiskey and chicken, dipping the last remnants of those poor birds that sacrificed themselves for this momentous occasion into a waiting vat of gravy. When the end finally arrived, everything began to magically glow and I saw myself leaving my body behind while an ambulance crew applied a difibulator to my naked chest. I ate that Mega Meal, so you’ll never have to. So a chicken will never see the inside of a bucket again. So the taste can live here, instead of there. Forever.