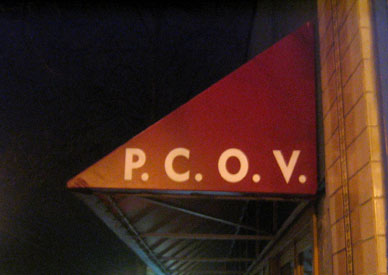 I should begin by telling you that being an adventure diner is a lonely business. The pursuit of cheap food prepared by strangers in questionable environments is dangerous, and often involves spending a lot of time on the toilet. It makes for few friends.

It’s even worse being an adventure diner with zero cultural heritage, save for that shit mix of white that’s void of any kind of distinct tradition except appropriation and burning people. Other than gravy and breakfast cereal what’s a Westerner have when it comes to relating to the heritage of food?

My visit to the Portuguese Club of Vancouver (1144 Commercial Drive) one Friday night was motivated entirely by these two shortcomings. I had an agenda. To get friends, and an identity. I’m not sure how drinking Martinis and acting like a complete asshole at the Hotel Vancouver before getting up and walking out without paying the tab fits into the scheme of things, but I’m pretty sure it has something do with being a white guy.

Seeing as it had the word “Club” in it, the P.C.O.V. seemed like the ideal place to begin my attempts at belonging to something, anything. I wasn’t exactly sure if I would be tested at the door with a few questions as to my Portuguese-ness before being allowed entry, so I studied Wikipedia before I left. It said that the Portuguese are really into leather bomber jackets. Having my red leather jacket on helped me look like a faggy-er version of everyone else, which allowed me to blend in quite seamlessly with a party of eleven fully engrossed in the harassment of their silver-haired friend standing in front of them. “Give us a line of coke!” A woman that looked like Andre The Giant in a black leather bomber yelled, sending the entire table into an eruption of laughter. I was poured beer, was handed bread, and told to get my food from the bar. I was a part of the Club, and it was time for dinner.

The P.C.O.V. is a large, two-sided room with tables and chairs, a big TV, and a bar. Covering the entire far wall is a strange collection of horse tackle, paddles, netting, some kind of traditional looking clothing items, and amazingly, a big boxy accordion, all of which are coated with white stucco. The whole club that night was run by two lovely and friendly ladies that were very accommodating when I told them that I had to change my order to suit the demands of my new Portuguese friends that insisted I eat something called Fabreeze.

Or at least that’s what it sounded like, in reality I don’t know what the hell it was called, but it was fantastic. For somewhere around $9.00 I was served thinly sliced cuts of grilled pork, paired with oven roasted and thick potato chips and a small bowl of olives, along with all the bread and butter I could handle. I happily devoured this Portuguese delight while listening to my new Portuguese friends sloppily mixing the melody and lyrics of A Jolly Good Fellow with “and give us free drugs tonight…” over top of a steady rotation of Bon Jovi and AC/DC coming from the house sound system.

After thirteen pitchers of beer, I was escorted out of my new Club arm in arm with my new Portuguese friends, full of Fabreeze. Undoubtedly the charms of the P.C.O.V. and the people in it could never be accused of thinking less of my unruly dining habits and extended toilet time, but in the end, I wasn’t fooling anyone, not even myself. I was not Portuguese. So the bus ride home was spent thinking about who exactly I was then, and where I was going to connect with my lineage as a culturally naked loser.

The Hotel Vancouver (900 West Georgia Street) is just about as colonial British as you can get in the city of Vancouver. It is the bedroom of the town, a defining feature of the city’s skyline. It shares its history with a group of hotels built in support of, and were once owned by, the Canadian rail system that played a large part in the formation of Canada. Thankfully the exterior of this old dame hasn’t been touched, but the interior is another story. While the room is impressively large and has the most wonderful din of idle chatter mixed with the twinkle of piano keys, the updated decor is abysmal. Thread bare couches dot the room with high-backed chairs, and Egyptian-themed atrocities clash with bad Renoir knock-offs hanging on the walls. The service is terrible. I was completely ignored. Here I was, with my own “people,” and being ignored. I was a dink to my server when I finally got her attention. I promptly drank two Martinis, ate some nuts, and walked out of there, actually I was kind of running.

Compare this then, to Shannon, my waitress at Gerard, a small and intimate bar in the Sutton Place Hotel (845 Burrard Street) that is stately in its decor of dark wood and low light. Gerard is a drinkers room, an English drinkers room, and Shannon is its keeper. She moved about Gerard, keeping an eye on her charges with an air of discretion, grace, and elegance. It was like she was touched by the hand of God for the sole purpose of being a cocktail waitress. Her ability to administer tall stemmed libations with a bewitched twitch of the nose had me completely smitten.

Yet another evening of adventurous dining had taken its toll. Uncomfortably full, and even worse, a criminal at large, forever banned from the Hotel Vancouver, found me alone once again. All was not lost though, I had connected with something after all. I belonged to something. It wasn’t the leather clad Portuguese with their excellent cuisine and open armed hospitality, and it certainly wasn’t that overpriced dump The Hotel Vancouver. It was Shannon, my heart belongs to her. Still don’t have any friends though.