Grade 'A' Cafe and Restaurant 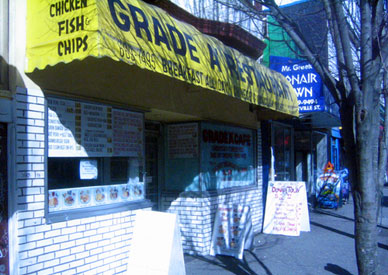 Victim of a dinner that consisted entirely of spirits and cocktail garnishing, I awoke sometime around the breakfast hour one morning, fully clothed and wildly hungry. This was an urgent matter – a dining emergency – and for whatever reason, the yellow awning of the Grade ‘A’ Cafe & Restaurant (1173 Granville Street) appeared in my mind like a message sent straight from my stomach to my brain saying “hurt me.”

The hangover breakfast is a precarious balance of timing, location and ingredients. Amateur revelers are under the impression it’s a social thing that involves lining up like cattle and giggling about the past evening’s antics over gourmet omelets at a diner with a buffoonery of crap on the walls. I belong to the camp that believes this sort of meal is a solo venture, like going off somewhere alone to die so that your dignity remains intact. The hangover breakfast should find you seated quickly in a rather filthy environment, one that will suit your contemplative depression as to why you keep doing this to yourself. A very private matter indeed. Stepping into the Grade ‘A’ Cafe found me comforted by the company of like minded individuals, dining alone, sufficiently long faced, and from the appearance of one patron, on some sort of life support system.

Seeing as I was still wearing the pants that I woke up in, the overwhelming stink that greeted me inside the Grade ‘A’ Cafe was actually a welcomed masking of my own odor. Only hours earlier I was getting out of a cab with an opened can of beer tucked into my jacket that wound up depositing its chilled contents onto my lap, making me look like I had just pissed myself. Now I just smelled like a bar room carpet, which was thankfully unnoticeable to my discerning party of old guys eating their breakfast amongst the all too familiar smell of mold, mixed with a very slight underpinning of sewage.

There is something intensely comforting about fountain pop though, and when I sat down at Grade ‘A’, close to their 5-pump drink fountain and ordered a large Pepsi with lots of ice, I immediately started to feel better. Maybe its the fact that it comes from a brightly lit machine that’s called a Fountain, or maybe its the sugary, watery coolness that fizzes a dance of bubbles about your lips as you sip it, but fountain pop is truly a nectar of the gods in these kinds of situations. Within minutes I had become accustomed to the smell of the Grade ‘A’ Cafe, and an overwhelming need to vomit replaced itself with an enthusiasm for their menu.

All the usual suspects were here, sandwiches, steaks, soups, salads, seafood, a segregated Chinese food menu, and of course, eggs. Despite the sign painted on the window outside boasting the best all day breakfast in town, my condition was not ideal for testing the Grade ‘A’ chef’s skill with eggs. Instead I decided to play it safe with the sponge like characteristics of a Clubhouse sandwich and fries paired with a house salad. My choice of dressing – the dressing I always use for simple tossed salads – was, of course, 1000 Island, a concoction who’s name is as romantic and mysterious as its tangy, salmon colored pallor. The salad, served in a small side dish with iceberg lettuce and a few flakes of carrot, barely qualified as such. My server then instructed me to self dress with a massive squeeze bottle of 1000 Island dressing; it would prove to be my near undoing.

In fact, once my Clubhouse arrived, all kinds of odd and crude combinations of condiment found themselves onto my plate. Between long audible sighs and lots of forehead holding in an attempt to just get the food into my body, a full on sandwich and fry dunk-fest began to take place with assembly line like fervor. After a visit to the ocean of 1000 Islands, to a waiting pile of ketchup, some time in the Worcestershire bath, and finally into a pool of hot sauce, each bit of food made the rounds of my plate before it was forced into my mouth. I devoured everything in a disgusting display of desperation and custom saucery, all the while yammering away to myself about the state of my well being and taking pictures of everything in sight. As a result, I am sorry to report that I have no idea what the food at Grade ‘A’ tastes like.

It was only after I cleared my plate that I was able to sit back and take stock of the interior I found myself seated in. The Grade ‘A’ Cafe likens its decor to that of a cottage exterior. The room is lined with a relief of country style shingles that makes for a faux roof line painted in an unappetizing and unnatural shade of pale blue. A mid-height wall that runs the length of the dining area is topped with a collection of well cared for plants that clash green and light blue together with such force it would challenge any appetite. Of course, there are the signs, always the signs. I don’t even read them anymore, except for the one I noticed pinned to a blue pillar in the middle of the room letting everyone know that cigarettes were available for $9.00. My cook, on this visit, prepared food with unwavering dedication in a traditional chef’s outfit of white, complete with one of those disposable paper hats in the shape of a wedge.

And so it goes, that one Saturday morning I took my grade A hangover and beer stained, stinky pants to the Grade ‘A’ Cafe & Restaurant for the all important past time of the hangover breakfast. Let’s face it, we’ve all been there, and under these circumstances rules of cuisine are blurred by necessity, odd cravings, an empty stomach awash in poisons, tired eyes and a palatable sense of self worthlessness. It’s unlikely that I will ever dine at Grade ‘A’ again, but that doesn’t mean that if you find yourself in a similar situation, where you need a restaurant that smells worse than your pants, you shouldn’t go. I give Grade ‘A’, a B+.