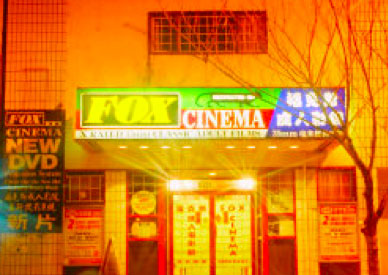 I’ve spent many an evening sitting in the front row of a theater, sobbing through RomComs while mindlessly feeding myself buttery treats paired with a gallon of soda. So it wasn’t much of a stretch then to have dinner at a cinema this past Valentine’s Day, since every restaurant in town was full. Yes, the theater for dinner, where food and fantasy mingle with each other in a dark and public space. Rather than surround myself with lovers staring longingly into each others eyes between bites of dessert, it made more sense to spend the evening dining alone while staring at the off-tint screen of the Fox Cinema.

Blanketed in a garish shade of light orange carpet that clashes with the yellow painted walls, the Fox Cinema might be the most unappealing theater lobby I’ve ever been in. The Fox also smells really bad, similar to the musty, moldy odor of a condemned building; a real appetite killer. Decorated with a haphazard arrangement of plants, and an extensive collection of telephone books, the small lobby at the Fox Cinema is void of the expected stipends that you would find in any other movie house. The only thing that hinted at the fact that I was in an actual theater were the movie posters hung about the room, all of which advertised various themes of sexual desire and role play. Titles like Summer In Paradise, Sensations and Ultraflesh accentuated the pornographer’s living room feel of the Fox Cinema lobby. There was no ticket booth, no arcade, no flashing lights, not even a leader board letting you know what’s playing or when it starts, but most importantly, and to my ultimate disappointment, the Fox Cinema didn’t have a concession stand. Instead there was just a lone Chinese guy wearing sweatpants, sitting in the back corner, watching a small television, waiting for me to hand over my money. He seemed entirely confused with my inquiry about food, but happily produced a bag of Doritos and a bottle of IGA house brand water, which, included with my nine dollar admission fee, rang out to a competitive twelve bucks.

After getting my food in order there was only one other place to go, and that was through the large and daunting entrance to the “Auditorium.” But not before I briefly paused to admire all the signs that had been posted on the set of large black doors. Except for one that advertised the availability of a couples only room for an additional $20.00 – which had me racing through a mental repertoire of women that would be suited to the romantic and gentlemanly gesture of renting an entire room just to watch a movie – every sign was saying the same thing: No Smoking. In every conceivable font and format the owners of the Fox wanted one thing made clear to its patrons: smoking in the auditorium was strictly forbidden. Presumably, then, everything else was fine.

Most theaters have some kind of helper lights that assist you with the disorienting task of trying to find a seat until your eyes adjust to the darkness inside. There was no such amenity at the Fox, so finding a seat proved rather difficult because the cinema was not only much bigger than I expected, but actually quite busy for a cold and rainy Thursday night. Stumbling through a small crowd of dark silhouettes milling about in a weird standing only area just inside the entrance with my Doritos and water was an unsettling experience, so I took the first available seat I could find. When I could actually see something, I began to take note of the room within which I would be having my dinner. 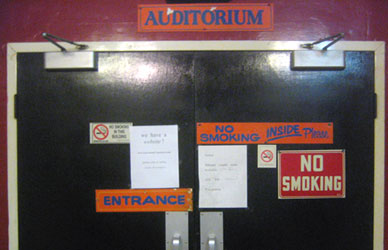 The seats were deep and covered in a dark maroon vinyl. They were unlike any cinema seat I had been in prior to the evening in question, and likened themselves to the bench seat of a mid-seventies Chrysler rather than a theater chair. The auditorium itself was sparsely decorated and gruesomely lit by two exposed light bulbs hanging from the walls. The screen, while large and sufficiently proportionate to the size of the room, suffered from a projection system that had been retired for a DVD imaging unit that forced an eight foot warning message onto the lower left hand corner of the screen that said “Please replace the light bulb”, advice that should have been followed because the film being shown had a psychedelic green haze on it the whole time.

It should be noted that the Fox Cinema offers a two dollar seniors discount, which, upon my visit, many older chaps seemed to be taking advantage of. There was a constant assortment of men, young and old, parading themselves up and down the main isle of the Fox. In fact, nobody seemed interested in what was happening on the screen. With all the people coming in, going out, sitting down, looking around, getting up and changing seats, it was hard to concentrate on the film that was being shown, which had obviously started before I arrived. I also have no idea what it was called, and could only surmise that it was shot in the mid-eighties and was about some nerd-ish student returning to school, or just entering school, and he had a crush on his all female cast of teachers.

The sound at the Fox Cinema was incredibly substandard and not much louder than the volume you would watch a movie at in your own living room. I had quite a time of it, trying to make the crunch of my Nacho Cheese Doritos quieter than the moans of the female character on screen who had the hero of the picture’s face between her legs after instructing him that she would “give him a lesson he wouldn’t forget.” My Doritos were quite forgettable though and had the unpleasant aftertaste of sawdust, which at least was kept at bay by the IGA brand water. The Doritos were hardly a match for the passionate love making that was unfolding on screen, which by mid bag found the overly tanned and feathered hair male lead actor thrusting himself into the rear end of his now screaming teacher. However, my Doritos were still louder, and I must have been an annoying addition to the scene at the Fox, since no one else happened to be dining.

It didn’t take long for the student to ejaculate all over the backside of his teacher, thus ending his lesson and the movie, which allowed me to notice as the credits were rolling that several men positioned themselves closer to my seat, and seemed to be very interested in my substandard Nacho Cheese Doritos and IGA water. I decided that it would be better to finish my dinner on the way home when I made the disgusting discovery under the coach lighting of the bus, that my Doritos were a full two months past their expiry date.

Admittedly, Valentine’s Day at the Fox was not quite the dinner theater experience I had imagined. My hunger was hardly satisfied by three year old Doritos and I only got to see about 25 minutes of a film I paid nine dollars for. Still, I was privy to a raw and engaging performance by two obviously dedicated artists that will encourage me to order a pizza with a date in the couples only room at the Fox Cinema, before I let myself be emotionally destroyed by the next Hugh Grant film at the cineplex down the street.