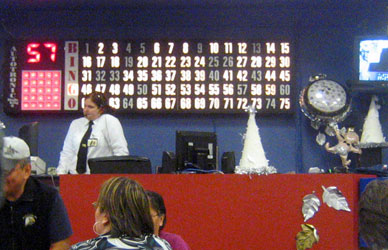 Planet Bingo is not a Planet, it’s a fucking universe. A huge and multi-leveled, self contained universe with its very own bus stop, convenience store to supply the Bingo pros with their wares, its own fleet of cabs waiting outside to whisk winners away to the nearest Wal-Mart and its own restaurant called the Galaxy Grill. Which is exactly why I landed on Planet Bingo one Friday night. Who knew that I would barely make it out alive.

If I was going to properly assess Planet Bingo, I needed to seamlessly blend in with the environment there. Obviously, then, I would have to play a few games of Bingo, and you can’t play Bingo without a “dabber”. So, despite being lured by the gravitational pull of the planetary imagery of Planet Bingo’s marquee sign outside, I went to the store just to the left of the entrance to choose my dabber first. I needed something that conveyed a sense of my personality and love of food, something that would bring me good luck, something that the ladies would like and, of course, something that would take me to the jackpot of riches I found myself dreaming about on the bus ride over. I immediately fell in love with an Elvis dabber loaded with green ink that was actually signed by Elvis Presley himself. There were hundreds, probably thousands to choose from, but tonight, the King and I would be taking care of business. 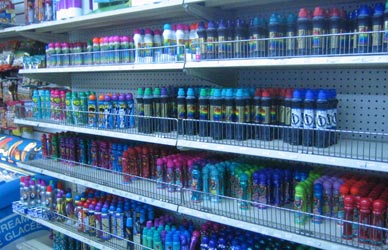 Planet Bingo is a strange place, unlike any I have ever visited. The inhabitants are mostly women in their mid to late 60’s. Except for the steady and droning voice of the caller putting everyone under the spell of a letter and number mantra, the place was unsettlingly quiet. The atmosphere in the cordoned off smoking area was most agreeable to my own natural habitat, so that’s where I decided to setup and conduct my experiments. “B23. Two, three. N14. One, four. G16. One, six.” It went on and on while I scoped out the Galaxy Grill and set down my recently purchased set of five Bingo cards ($2.50), my Elvis “The King” Presley dabber and a half-litre coffee cup filled with my favorite Pinot, which instantly transformed Planet Bingo into Vancouver’s only bar that you can smoke in. This mixed with Planet Bingo’s other worldly grid of circular ceiling lights, along with its faded and quite filthy carpet covered with an exploding fireworks print, had me thinking that I had found a new home amongst the stars.

I was starving and wasted no time getting in line at the Galaxy Grill, where a typical fare of burgers, hot dogs and toasted sandwiches were being offered at reasonable prices. I settled on the Galaxy Burger for $6.75, but before I could finish describing with maniacal excitement how I wanted my onions fried, I was interrupted by the counter help and informed that the kitchen was closed. Closed!? This was unacceptable. I told the woman that I had checked the Planet Bingo website and it had said food was available until 11:30pm, and that I had traveled a great distance in my spaceship (the #3 Main) to sample the wonders of the Galaxy Grill. “I know, I’m sorry, but we only have one cook, and she started too early today,” was the only explanation that was offered. I walked back to my empty Bingo cards and Elvis dabber to sip my contraband Pinot in melancholic confusion.

Your Only Magazine Food & Drink Columnist would not give up that easily though! Slightly pissed now on a half litre of wine, I returned to the lineup at the Galaxy Grill, with my eye on a disgusting looking slice of pizza that sat beneath a tired looking heat lamp I had not noticed upon my first visit. It was the last slice, and as each person ahead of me ordered pops, chips and slices of pie, I gripped my fists in fear that my pizza would be sampled by someone else. I got down to the last woman ahead of me, and of course she just had to get the fucking pizza. I began to put plan B into action which involved carrot cake and beef jerky, when a lovely twist of fate arrived in the form of her being so unimpressed with the pizza she instead got a muffin.

There I was, back in the smoking section of Planet Bingo, happily consuming my stale hand-me-down pizza (which was surprisingly good) paired with a diet soda and bag of salt and vinegar chips, trying to keep up with the task of dabbing out the letter and number combinations on game 2 of my five game booklet purchased earlier on. The games move along very quickly, and as I took stock of the inhabitants of Planet Bingo I could tell that the attraction of Bingo for them must be that it allows little time to think about anything other than the repetitive function of dabbing out the numbers called out by the caller. The very large half-man-half-woman seated beside me – maneuvering her white poodle dabber with a robotic finesse – was all too eager to help me out with the game, not to mention the disposal of my used Bingo sheets. I found the people of Planet Bingo to be of a lonely sort, and seeing as how alcohol was forbidden there, probably recovering boozers.

There is nothing like the collective sigh that emanates from over 100 losers in a very quiet room when someone reaches Bingo other than them. Imagine, then, the glory of victory as the winner gets to walk towards the winners circle to collect cash. Perhaps the looks on the faces of the winners were too intoxicating for me, or I was just plain too intoxicated, but towards the end of game four, much to my amazement, while stuffing potato chips into my face, I connected five dabs of green ink dispensed from the King of Rock N’ Roll himself on my game card, which caused me to break the concentrated silence of Planet Bingo with an all too enthusiastic call of, “Bingo!” I am pretty sure I high-fived a couple old ladies while making my way to the front of the room to have my card verified. Quickly though, I realized the horror of my error when I was informed that in order to win this game, my dabs needed to connect in the shape of an X. A fucking X! I couldn’t believe it, and neither could the inhabitants of Planet Bingo as the call came out over the loud speaker, “We have a false Bingo. I repeat, we have a false Bingo.” Which threw Planet Bingo into anger and panic as everyone went fishing into the garbage to get back their disposed game cards.

The sweet and friendly inhabitants of Planet Bingo had now turned hostile. There was much finger pointing and head shaking. Maybe it was my own paranoia heightened by my idiocy, but they seemed to be focusing on the illegal contents of my coffee cup. I imagined a cacophony of old hags devouring my flesh and destroying my coveted Elvis dabber. I decided it was time to escape Planet Bingo, and as I told my bus driver to hit warp speed I watched Planet Bingo shrink smaller and smaller behind me, still poor, quite drunk, sickeningly full, but most importantly, still breathing.