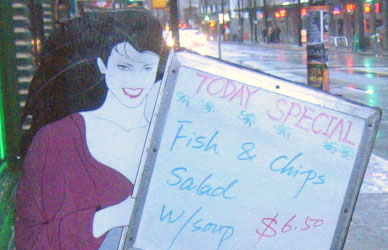 Normally a woman wearing a low cut one piece purple jumpsuit and black pumps, sluttily grinning with a “Today Special” board in her hand could convince me of anything. But when she’s standing in front of Smile Restaurant (424 E. Pender St.), cut from plywood and painted to look like the cover of Duran Duran’s Rio, well then I have my doubts as to the charms she’s advertising. I also must admit that I had eaten at Smile Restaurant before, and just about shit my pants afterwards. Time heals all wounds though, so I found myself taking a seat with a renewed sense of hope and a guest diner who said that her mother would never let her eat in place like this.

Maybe I am losing my mind in the toasted wonders of grilled cheese and clubhouse sandwiches, but Smile Restaurant seemed like a macrocosm of how the world should be. Why then wouldn’t I want to share this with the children of the planet? A gentleman of excess might be a terrible role model – I’ll be the first to admit – but this restaurant seemed like the perfect place for me to impress upon the youth of today a sense of limitless possibilities through the mantra of happiness and goodwill to all humans. I imagined myself filling Smile Restaurant with our future, buying all the kids a pop and a Denver sandwich, because if a Denver sandwich doesn’t excite the leaders of tomorrow into a new way of thinking, then the world is doomed. I was only able to convince one 10 year old kid on loan from her mother on a Sunday afternoon to come with me though, and I had to scrap the Denver, because I’m too cheap. 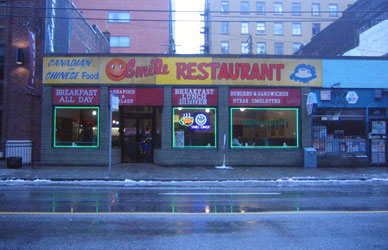 Smile Restaurant really is as life affirming as plywood ’80s babe out front would have you believe. It’s utopic in its overwhelming display of all things happy! It’s tinged with a hint of retro diner (wasn’t everything wonderful in the ’50s!?) and boasts the availability of both Chinese and Canadian food on the windows and signage out front. Imagine that, two cuisines on one menu. Evils such as racism don’t exist within the little Pender Street cafe. There is happy face imagery everywhere: in neon, in color print-outs fronting the menus and on the clock above the kitchen. The booth style seating and counter service swivel chairs are dressed in the most wonderful shade of emerald green vinyl that wouldn’t be out of place on the shoulders of someone rich, and presumably very happy.

“You want to be happy? Make sure you have a lot of money. A fucking lot of money.” I find that kids listen if you swear, so I drove home my point with an expletive while admiring the interior of Smile Restaurant. Flowers make people happy too, so it makes perfect sense then that the wallpaper covering the walls of Smile Restaurant is in a floral print, and that the only pictures hanging on the walls are of flowers. They might be the highly stylized, air brushed kind that are framed in gold plastic and bought at dollar discount stores, but they’re still smile inducing in their own special way.

The staff at Smile Restaurant were clearly under the influence of the environment they worked in. They must be the jolliest crew I’ve ever had the privilege of being served by. They were always smiling whenever we were being attended to and everyone stopped by our table at least once to see how everything was. They outnumbered by three the only other patrons in the place, who were two old guys doting over coffee and one kid knocking back a milkshake with fries. They were all disciples of the happy faced Smile Restaurant. Cooks, waiters, and waitresses all crammed into one of the U shaped booths at the back over a huge spread of Chinese food. Speaking in Cantonese, which didn’t appear to be lost on the lone white guy in the group because the Smile staff probably speak in every language known to mankind anyway, they would intermittently erupt into a chorus of laughter while eating their lunch. It was beginning to rub off on me too, I could feel the life force of Smile Restaurant! I tried to entertain my guest with silly stories in an effort to gauge the effect Smile Restaurant was having on someone who hasn’t yet ruined themselves. Instead she just dryly noted, without a smile, that the place smelled like an egg roll.

Smile Restaurant’s international menu lists steaks, all day breakfast specials, omelets, sandwiches and salads paired with Chinese dishes like chow mein, egg foo yung and fried rice. I decided on the very Canadian cheeseburger and fries doused in white vinegar. My guest, terrified by my suicidal eating habits, played it safe with a side of fries and a coke, which was good because I’m totally selfish and couldn’t afford to feed us both anyway. Perhaps I’ve built up some sort of immunity from my dining experiences as of late, because I healthily cut through my cheeseburger without a moments hesitation as to my history with Smile Restaurant and the toilet. I’m not even sure if it tasted good, and really, I don’t think it mattered. We were there as witnesses to something magical!

My guest was not feeling it though. While staring at all the flowers, stuffing the cheeseburger in my face and yammering on about the bottle of scotch I was going to buy myself for Christmas, I couldn’t help but notice a morbid silence coming from the other side of the table. Shockingly pale and sunk into the back of the booth, the poor kid whispered, “I’m starting to feel sick, I’m never coming here again.” Not exactly the fantasy scenario of Denver sandwiches in the headquarters to a new world order of smiles, happiness and flowers. While leading her through some breathing exercises which have helped me in numerous similar situations of ill-advised dining, we were interrupted by yet another Smile Restaurant employee. Smiling, and with a huge black shiner on his left eye, he inquired if everything was OK while the speaker above him filled the room with Peter Cetera’s The Glory of Love. I assured him everything was just fine, and asked for the cheque. My ten year old guest was quick to point out that he seemed happy, so he must be rich.

Had I discovered some sort of secret society of happiness on Pender Street? Was it my responsibility to affect social change through good will and peace on earth by luring the youngsters of today and the leaders of tomorrow into this church of international cuisine? Indeed my efforts were probably forgotten and unnoticed that Sunday afternoon, but you can’t blame a guy for trying. I suggest you all head down to Smile Restaurant for a dip in the fountain of happiness, and a cheeseburger. You’ll be a better person for it, just don’t shit yourself… and if you do, just remember to keep on smiling!