The Brave Bull's House of Steaks 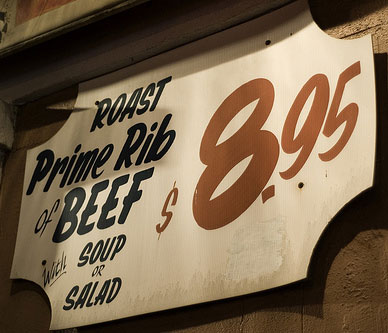 After a long stretch of clubhouse sandwiches in dirty cafes, skid row bars, butcher shop lunch counters and slutty strip clubs, The Brave Bull’s House of Steaks’ faded awning, garishly boasting “family restaurant” seemed like a welcome reprieve from my lecherous dining habits as of late. Just what exactly constitutes a family restaurant anyway? Giddy staff in suspenders? A mascot that goes around entertaining the kids? Cheap prices? I hadn’t a clue. The whole concept seems completely obsolete these days, and on the icy Friday night in November that I paid my visit to The Brave Bull’s House of Steaks (1298 E Hastings St), it was entirely welcome. 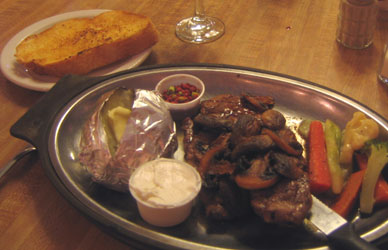 How I managed to avoid the Brave Bull for so long is as confusing as the exterior of the place itself. It sags on the corner of a thoroughfare of heavy industrial traffic oblivious to its presence. It looks like an old vinyl-sided three story walk-up disguised by a facade of imperial pillars, faux Spanish fixtures, an overwhelming plethora of signage tempting hungry drivers with cheap prices, a liquor license, and a sense of family. The sandwich board on the sidewalk out front informs customers of endless dining possibilities: “Breakfast!” “Coffee Break!” “Lunch!” “Dinner!” “Open!” But all these efforts seem lost on the general public, because on my Friday visit the place was completely empty.

Stepping into The Brave Bull is like stepping into a meditation on 70s dining. Deviation from the original interior is minimal, with the inclusion of some Eastern fans upon the walls, some Chinese lanterns hanging from the ceiling and a bunch of those 3D paintings that light up and have moving waterfalls. It also had a laminated review of the place from 1995 hanging beside every table. Other than that, the interior was all steakhouse circa 1975; a palette of beige and brown, a large padded leather bar acting as centerpiece to a collection of well worn tables, dark wood, wagon wheel chandeliers, Spanish knick-knacks, and bull memorabilia.

I can not begin to stress enough how meticulously cared for the dining room is – the almost manic amount of plants that dot the ledges and walls immediately exposed a caring nature about its owners. When an older Chinese woman greeted me with a menu and a friendly reminder that she only accepted cash, I could tell that she was the proprietor, and that she had oddly dedicated her life to running a steakhouse in Vancouver. I took a table by the window, and felt completely at home. It was the cleanest restaurant I had sat in for months, and knowing that the $40.00 in my pocket meant a no-limit dining experience at the Brave Bull, I was prepared to laze the evening away despite the fact that I was dining alone. There was something about The Brave Bull’s House of Steaks that seemed to accommodate the lonely, solo diner. There was only one other guy there besides me, reading the newspaper while nursing a large decanter of wine that he had on his table which I promptly ordered for myself to get things under way.

The house wine was cheap. The jar said half litre on it, but it seemed dangerously larger than that, and with a price tag of $6.95 I could see myself getting into a bit of trouble with the Brave Bull. Perhaps, then, that’s why my new mother/waitress asked me if I was driving; at these prices the House of Steaks seemed very drink-centric. After all, there’s an alcoholic in every family, and I suspected that seeing as it was a Friday night, I might be it. I matched my seven dollar chalice of loveliness with the $8.95 9oz. sirloin steak. I sat drinking and listening to the traffic outside, which was loud enough to penetrate the thin window beside me, but not loud enough to drown out the sound of Neil Diamond’s “September Morn” over the house speakers mixed with the obvious sound of my steak being pounded with a dull blunt object from the kitchen in the back. Hunger was building.

Before long I was devouring a perfectly cooked medium-rare sirloin, served on a classic metal plate rimmed with brown plastic, topped with mushrooms, paired with a foil wrapped baked potato, garlic bread, steamed vegetables, and a side salad. My new mom began to make her rounds to the two diners that occupied her establishment, making sure her boys were happy. She stopped at my table to comment on how slow it was, and that people must be at home watching hockey. “Tonight they phone the pizza,” she said, while laughing and exposing the fact that the Brave Bull is normally busy, thankfully ending my amazement that such a great place could be so empty. My entire experience came to $21.00, including a $4.00 tip, a gesture that seemed to knock mom into confusion. “All for me?” she responded, with an appreciation that was cute, but alarmingly sad at the same time.

If the family restaurant still exists, it has certainly fallen prey to a confused sense of values. Thoughts of today’s most popular restaurants conjure images of franchised interiors that are bland and void of uniqueness, with waitresses that have their tits hanging out over tight dresses and exorbitant prices no family could afford. The Brave Bull’s House of Steaks might be far from your idea of fine dining, or, reaching even further, a family experience. After my evening though, I think I’ve found a new home. I’m moving into the Bull’s basement, even if mom says I have to quit the strip club scene.